WASHINGTON, D.C. (Oct. 6, 2015; 10:55 p.m. Eastern) -- A raucous crowd of 900 attendees at Thursday night's 2015 Media Research Center Gala and DisHonors Awards dinner gave the dubious honor of Quote of the Year to NBC's Ayman Mohyeldin for this gem in which he trashed the late U.S. Navy SEAL Chris Kyle as having gone on "killing sprees" during his tours of duty.

NBC correspondent Ayman Mohyeldin: "When you juxtapose it [the movie American Sniper] with the real Chris Kyle and what has emerged about what kind of personality he was.... a lot of his own personal opinions about what he was doing in Iraq, how he viewed Iraqis. Some of what people have described as his racist tendencies towards Iraqis and Muslims as he was going on some of these, you know, killing sprees in Iraq on assignment. So I think there are issues-"

To his credit, when this happened on the January 29 edition of MSNBC's Morning Joe, host Joe Scarborough didn't let that pass unchallenged: 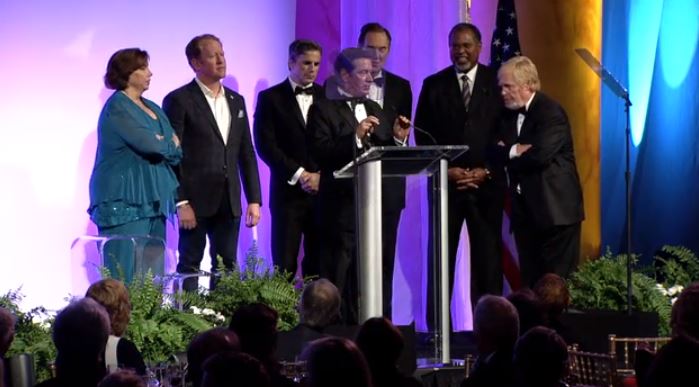 That entry was also the winner of the Damn Those Conservatives to Hell DisHonor Award, beating out CNN contributor Sally Kohn and MSNBC Hardball host Chris Matthews (see presentation video below).