As pressure grows on Sen. John Walsh (D-Montana) to drop out of his election campaign in light of his plagiarism controversy, the liberal media are largely ignoring the story, despite the fact that "the Senate hangs in the balance" and "any one race can make or break it," Media Research Center president and founder Brent Bozell told the audience of Wednesday's edition of the Fox News Channel program the Kelly File.

By contrast, Bozell noted, in years past, particularly crucial election years, the media have obsessed over scandals in years gone by that plagued Republicans, making them household names in a less-than-flattering manner [LISTEN to MP3 audio here; WATCH the full segment by pressing play on the embed below the page break]:

Do you remember Mark Foley, the congressman who had those emails with that male page back in 2006? One hundred and fifty network news stories in two weeks. Herman Cain and the allegations of womanizing. One hundred and seventeen network stories in one week. Think about so many others.... Think about Larry Craig, the senator from Idaho next door with that toe-tapping in the men's room. They talked about that for months.

Think about Chris Christie, whose middle name could be The Bridge. They're still talking about that one.

And yet this, that is ongoing, that's breaking news, when the Senate hangs in the balance? Nothing.

Simply put, "there's always room to do overwhelming coverage of [scandal-plagued] Republicans, no matter what it is," Bozell concluded a bit later in the segment. 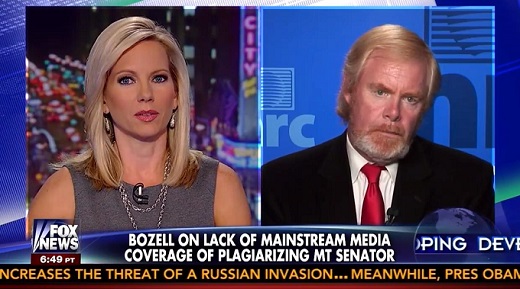