On Thursday’s edition of “The O’Reilly Factor” on Fox, Bill O’Reilly slammed back at Chris Matthews for asserting that O’Reilly and Pat Buchanan and Joe McCarthy look alike: “In addition to being misguided intellectually, Mr. Matthews needs glasses badly. Why is he spouting this nonsense?”

O’Reilly turned to Fox contributor Erick Erickson and MRC director of media analysis Tim Graham for answers about MSNBC’s rantings and falling ratings. He asked Tim about their lack of interest in the Obama scandals (video below): 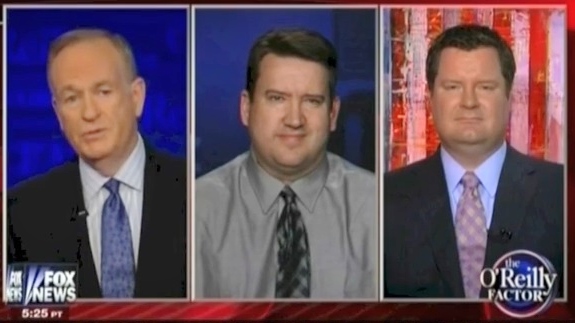 O’REILLY: You know what? They lead with weather, some of those stations now. [Think “Good Morning America.”]  They are covering anything other than that because they don't know what to say. So the core liberal audience, all right, and this happened after Romney lost some core conservatives just tuned out. They didn't want to listen to anything anymore they were so mad. That's what's happening with the core liberal audience. Mr. Graham, because they are disenchanted with President Obama because of the spying and the irs and all of the other business. They don't want to hear it so they’re gone. And now, Matthews has got to call me names and other people names. He has got to go on the attack because he has got nothing else. Mr. Graham?

GRAHAM: Chris is just unglued these days. And it's sad because, you know, this is
-- this network now has nothing to do but try to play defense. And some of these shows aren't even doing that. So you see these shows [think “All In with Chris Hayes”]  focusing on topics like pot brownies in Colorado and Wal-mart shareholder meetings. Look, Tom Cruise showed up, you know. It’s just like ‘What are you doing?’ You know, they are not even willing to stand up for Obama because they just have nothing defensible to say.

Erickson agreed with the theory that liberals like Chris Matthews are getting increasingly desperate:

ERICKSON: It's very much like people remember in the Iraq war, [Saddam Hussein publicist] Baghdad Bob as the Americans were closing in, he got more and more shrill and desperate. This is what is happening to liberal talk radio and liberal news like MSNBC. As the ratings go down, as people are becoming more and more disenchanted with liberalism. It doesn't relate to people who live within 100 miles of a river valley, only 25 miles of a coast. People are tuning out and becoming shrill trying to keep the core audience.