During President Trump’s first State of the Union address on January 30, MSNBC host Joy Reid took to Twitter to rant about how polarizing the speech was – not because of any of the policies he mentioned, but because it talked about things like “family” and “church,” which she dismissed as outdated and nationalistic tropes.

Her Tweet read: “Church ... family ... police ... military ... the national anthem ... Trump trying to call on all the tropes of 1950s-era nationalism. The goal of this speech appears to be to force the normalization of Trump on the terms of the bygone era his supporters are nostalgic for. #SOTU” 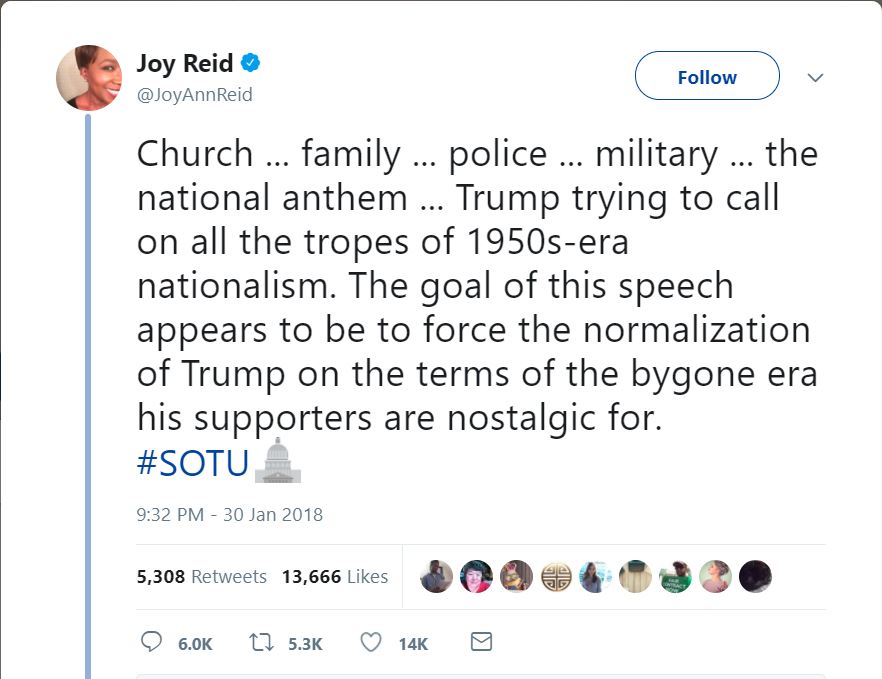 After this, she continued to rant for another 6 tweets about how, from her perspective, Trump didn’t actually uphold any of those values. Tweets 6 and 7 read: “[Tweet 6 of 7] Bottom line: the first half of Trump’s #SOTU speech was pure pabulum: GOP family values boilerplate that the party traded in for demographic rage and reality show vulgarity by backing him. The second half was the dark matter Trumpism actually represents: [Tweet 7 of 7] Anti-immigrant, backward looking, anti-innovation, and anti-progress. And of course his base loved every minute of it.”

For Reid to think that something as basic as family is an outdated and nationalistic trope shows just how far out of touch she is.

Even former-President Barack Obama would have been the target of this criticism from Reid, if she was being consistent. In 2015, during his own State of the Union address, Obama addressed the military, saying: “And we salute the courage and sacrifice of every man and woman in this 9/11 Generation who has served to keep us safe. We are humbled and grateful for your service.” Should she have accused Obama of pandering to nationalistic tropes by publicly praising the military?

Joy Reid hosts AM Joy, which airs for two hours on both Saturday and Sunday on MSNBC.