After 62 days of testimony, closing arguments and now jury deliberations, CNN has only managed to devote a paltry 36 minutes out of their 24/7 news broadcast to the corruption trial of sitting Democratic Senator Bob Menendez.

More than two-fifths of this coverage (14 minutes, 35 seconds) has been generated by one anchor: Jake Tapper, split between his weekday show The Lead and his Sunday show State of the Union. Most of CNN’s news programs, including the prime time shows Erin Burnett OutFront, Anderson Cooper 360 and CNN Tonight With Don Lemon, still haven’t covered the trial at all. 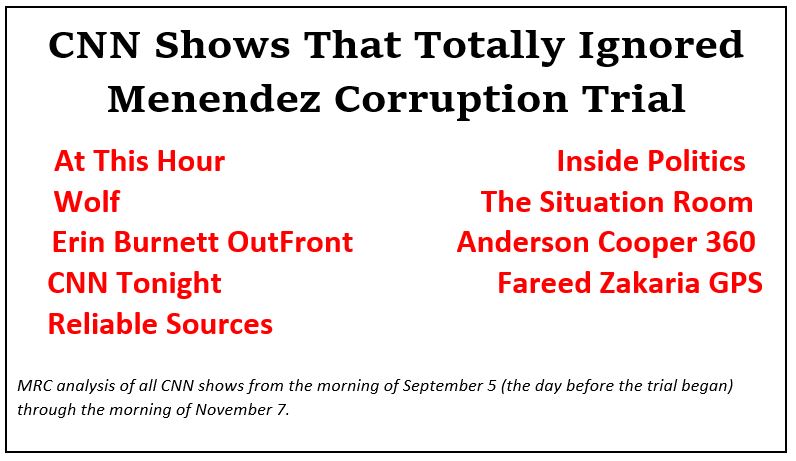 But even CNN’s lack of coverage isn’t as bad as the broadcast networks. The evening news shows of ABC, CBS and NBC have yet to cover the trial at all. Additionally, NBC’s Today has also failed to cover the trial for even a second, while ABC’s Good Morning America and CBS This Morning each ran just one story on their morning news programs (1 minute, 48 seconds and 22 seconds, respectively). Evening news coverage is more important, because on average it gets about twice the viewership of the morning shows (23 million vs 12 million for 2017).

“If I splashed ‘Menendez corruption trial’ on the front page of every paper that led this news cycle, and every news cycle in America, right? Which is the ongoing federal corruption trial of a U.S. senator, Democratic U.S. senator,” former Trump campaign strategist David Urban hypothesized on CNN. “people would have a completely different view of that case.”

Urban was responding after he was confronted on CNN’s The Lead With Jake Tapper with a CNN poll claiming that 65 percent of Americans worry about Trump campaign collusion with Russia.

“I bet if you ask people in America about the Menendez corruption trial – this network’s covered it, I’ve been here – it has not gotten as much attention as this, right? It is directly proportional to the amount–”

“The networks have been covering Russia for a while now.” Bernie Sanders alumna Symone Sanders interrupted, in an attempt to contradict Urban.