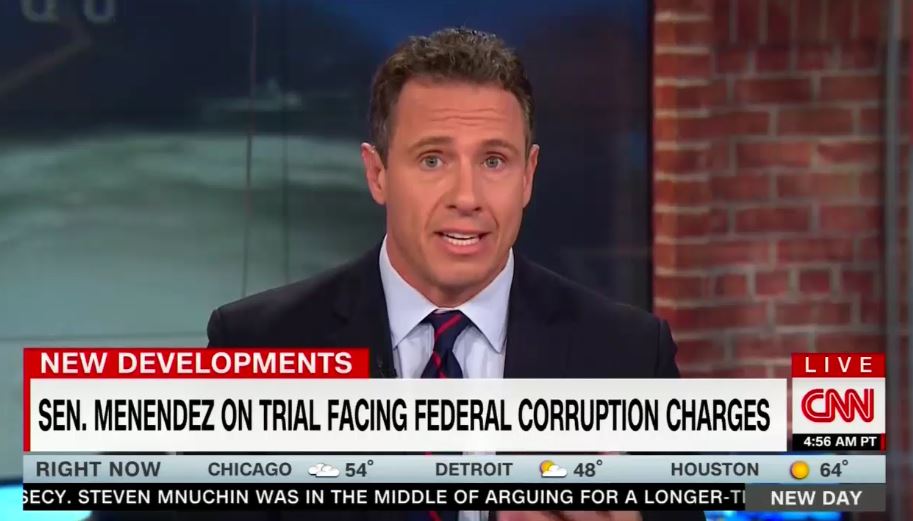 Since it began more than two weeks ago, CNN has provided a paltry 14 minutes and 11 seconds of coverage to the corruption trial of Democratic Senator Robert Menendez. In fact, the 24-hour cable news network has mentioned the trial only once since September 7.

For contrast, on just one day (September 18), CNN spent more than 45 minutes analyzing former White House Press Secretary Sean Spicer’s 60-second appearance at the Emmy Awards ceremony the night before. And that total doesn’t include all of CNN’s coverage of the Emmys, just the portions specifically about Spicer.

This lack of coverage for Menendez’s trial is especially egregious since CNN anchor Poppy Harlow noted on September 6 that “this is a big deal…because this is the first bribery case involving a sitting U.S. Senator in over three decades.” Soon afterward, her co-anchor John Berman promised that “we will follow this case very, very closely.”

Despite this pledge, the trial hasn’t been mentioned on that show since. 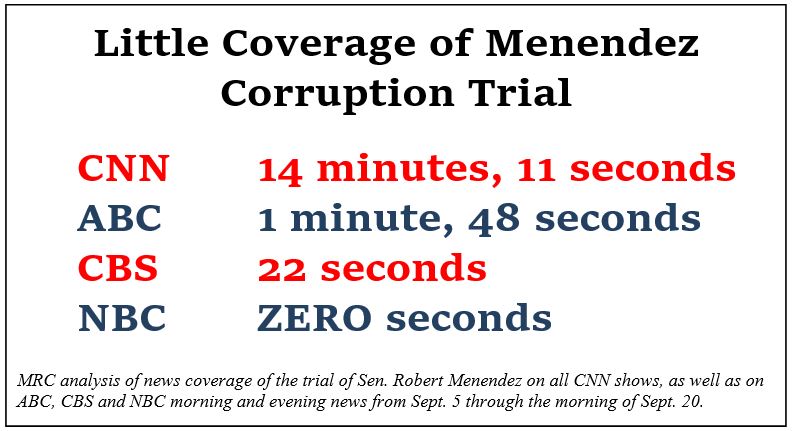 The New Jersey Democrat is accused of taking bribes from a wealthy donor in exchange for favors, including helping to procure immigration visas for the donor’s girlfriends from Brazil, the Dominican Republic and Ukraine. According to the North Jersey paper The Record, “Menendez faces six counts of bribery, three counts of honest services fraud, one count of conspiracy, one count of interstate travel to carry out bribery, and one count of making false statements on his congressional financial disclosures to conceal the crimes.” Menendez was indicted in 2015, and the trial began on September 6, 2017.

Coincidentally, CNN video is being used as evidence in the trial. In the lone island of coverage he provided on Tuesday, CNN’s Jake Tapper played the relevant clip, in which Senator Menendez told political correspondent Dana Bash in 2013 that it took him several years to reimburse his friend for $60,000 in gifts because “it unfortunately fell through the cracks” (see transcript below).

More than two-thirds (9 minutes and 49 seconds) of CNN’s Menendez trial coverage appeared on just one show: The Lead With Jake Tapper. The Menendez trial has yet to be mentioned on CNN Tonight With Don Lemon, Anderson Cooper 360, Erin Burnett OutFront, The Situation Room With Wolf Blitzer, Inside Politics, or Reliable Sources.

Broadcast network morning and evening news coverage of the trial has been even sparser than CNN’s. NBC’s Today, and all three broadcast evening news shows (ABC’s World News Tonight, CBS Evening News and NBC Nightly News) have yet to even mention the trial. So far, ABC’s Good Morning America has run just a single story on September 13 (1 minute, 48 seconds), while CBS This Morning has only provided a news brief on September 6 (22 seconds).

JAKE TAPPER: Speaking of votes, there is a Democratic vote, Senator Bob Menendez, right now who is in court. Jurors are deliberating over bribery charges against him, and those jurors are going to be shown new evidence tomorrow. That interview – an interview will be the evidence, that Senator Menendez did with CNN in 2013. He’s charged with accepting rides on private jets and upscale vacations, in exchange for political favors. Here is what Senator Menendez told our Dana Bash about retroactively paying for those flights. This is what he said in 2013.

DANA BASH: Senator, if you can explain why it took so long to pay back almost $60,000 in flights that you took with your friend?

SEN. MENENDEZ: Well, I was in a big travel schedule in 2010, chair of the DSCC plus my own campaign getting ready for a re-election cycle. And in the process of all of that, it unfortunately fell through the cracks that our processes didn't catch, moving forward and making sure we paid.