CNN Goes Bonkers: Spends 10 Hours on Comey Before a Single Word of Testimony 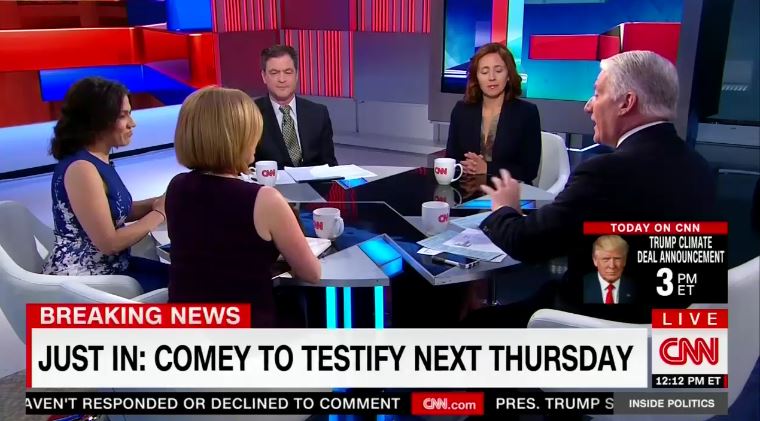 Former FBI Director James Comey has not said a single word in public, but the liberal media have been salivating for days over his upcoming testimony on Thursday. Case in point: from noon on Thursday (June 1) when the date for the testimony was set, until noon today (June 7), CNN has already devoted more than 10 hours of coverage to testimony that has yet to even occur. Their "Comey Countdown” logo first appeared at 3:01 AM on Monday – a full three days before the hearing was slated to start.

Think of it like the endless pre-game coverage of the Super Bowl. The massive anticipatory coverage is a not-so-subtle signal to the public that what’s about to happen is really, really, really important. And, instead of waiting to hear what Comey actually says in this hearing, airtime is spent on conjecture, speculation, and innuendo about the potential damage he might cause to the Trump administration.

On CNN Tonight on June 1, host Don Lemon suggested, “this is going to be the most watched thing – at least hearing – since Watergate.

On Inside Politics on June 6, John King insisted: “you can’t think of a day with more potential importance for this presidency.”

On CNN Newsroom on June 6, co-anchor Poppy Harlow claimed that this testimony had global appeal: “We will all be watching – the world will be watching – 48 hours from now.”  Later, Harlow repeated: “Switching gears to the highly anticipated – which I think is underselling this – testimony of Comey on Thursday, where the world, I think, is gonna stop and watch.”

In the same broadcast, co-anchor John Berman compared the Comey testimony to famous hearings in the past – although for some reason he could only think of ones that put conservatives in the bull’s eye. “And look, we are just 48 hours away now from what could be some of the most consequential testimony in Congress, really since Watergate. Maybe since Anita Hill. Fired FBI Director James Comey, he will testify before the Senate Intelligence Committee.” Apparently Berman doesn’t think that the Bill Clinton impeachment hearings were very consequential.

Co-host Chris Cuomo declared on New Day on June 6 that the only way this testimony would NOT be interesting was if Comey held back, “On Thursday, assuming Comey is open to the questions that come his way, that’s gonna be must-see TV.”

On CNN Tonight on June 1, host Don Lemon ironically criticized conservatives for trying to judge Comey before the hearing. “Have you noticed the strategy now is to put him on trial and to sort of impugn his reputation and his career before he even testifies. Have you noticed that?” Yet Lemon and other members of the media have already declared President Trump to be guilty, and reveled in what damaging information Comey might bring up, before this same hearing.

Thanks to: Charles Dorfeuille, Alex Xenos and Michael Johns Jr. for contributing to this report.