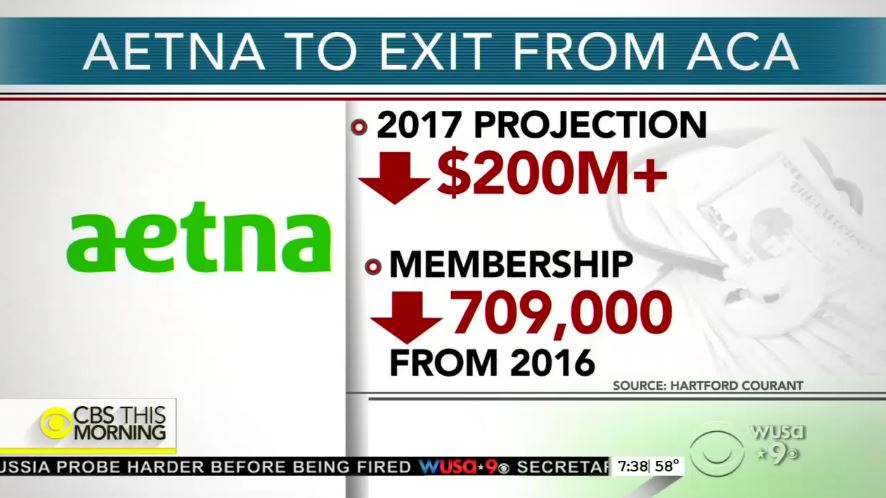 The major health insurance provider Aetna announced that it would be pulling out of the last two states where it still participated in ObamaCare. Yet, the morning news shows of ABC and NBC completely ignored this important news story, while CBS This Morning gave it a mere 25 seconds.

This continues a longstanding network news tradition of defending the Affordable Care Act and ignoring its failures.

In a study released on October 28, 2016, the MRC’s Bias by the Minute project detailed how the evening news shows on these three networks routinely ignored or barely covered ObamaCare’s failures during that year. Back in August of 2016, when Aetna announced it was planning to start pulling out of ObamaCare after losing $300 million, CBS Evening News was the only broadcast evening show to even mention it. Earlier in that year, when United Healthcare announced it would pull out in all but a “handful of states” and that it would be “dramatically scaling back its involvement” in ObamaCare, only CBS picked up the story, and only for a fleeting 23 seconds on April 19.

Meanwhile, the networks have been quick to mock President Trump and Republicans for pointing out the obvious implosion of ObamaCare. On NBC’s Today on February 28, Matt Lauer challenged House Speaker Paul Ryan, “I just want to say that a lot of people disagree with that terminology that ObamaCare is collapsing under its own weight.” Coincidentally, Ryan retorted by pointing out “Well, I’ll just quote Aetna, they said that it’s in a death spiral.”

On CBS Evening News on April 16, correspondent Chip Reid played a clip of Trump saying that ObamaCare was “exploding right now,” then immediately brought on someone to debunk him. “But Larry Levitt of the Kaiser Family Foundation says the President is wrong,” Reid said. “There is no real sign that ObamaCare is exploding on its own,” Levitt echoed.

Reid did note that “ObamaCare exchanges are teetering in some states including Tennessee, North Carolina, Georgia, Nebraska and Arizona,” but then quickly reassured viewers with a clip of Levitt saying “but, by and large, the insurance market is stable under the Affordable Care Act.”

CBS This Morning on February 28 brought on Bloomberg journalist Shannon Pettypiece, who insisted “I think these predictions of ObamaCare's death spiral, from the reporting I have done, are greatly exaggerating the problem.”

On NBC’s Meet the Press on March 12, host Chuck Todd played a clip of Trump saying “’17 would be a disaster for ObamaCare. That’s the year it was meant to explode because Obama won’t be here,” but sandwiched it in between a heavy dose of condescension. Then Todd asked “When we hear statements like this [video of clip of Trump quote] are we becoming too conditioned to dismiss what the President of the United States says?”