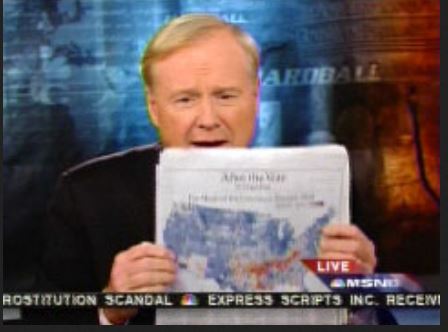 Obama’s election was a “leap towards something better and uniting our country as never before in our history,” according to MSNBC’s resident Obama-super fan Chris Mathews, on the Sunday before election day eight years ago. But early Wednesday morning, Matthew’s colleague Andrea Mitchell frowned at Hillary’s defeat, calling it “history put on hold yet again.” Earlier in that same segment, NBC Today co-host Savannah Guthrie shared this same sentiment: “Hillary Clinton's attempt to break the ultimate glass ceiling in politics” was “a presidential bid that once again fell short.”

Eight years ago, NBC anchor Brian Williams boasted "as one columnist put it, America matured in 2008 by choosing Barack Obama." Harry Smith (then with CBS, now with NBC) declared “I wept tears of joy last night” after President Obama’s election. Byron Pitts (then with CBS, now with ABC) proposed about Obama's win with 52 percent: "When was the last time our nation cheered this much?"

Gayle King’s comment reinforce an observation made by CNN’s John King on November 9, “that's one of the many lessons to be learned. Number one, this town is clearly out of touch. And that includes the media and the political establishment. Out of touch with America. Washington is not America."

When it was Obama, MSNBC’s Chris Matthews declared that he had a civic duty to support the new president-elect. "I want to do everything I can to make this thing work, this new presidency work," Matthews declared to the astonishment of host Joe Scarborough, who asked him if that was really the job of a journalist. "Yeah, it is my job. My job is to help this country," to "make this work successfully, because this country needs a successful presidency more than anything right now," Matthews insisted.

Wonder if Matthews remembers that now.