Once again, ABC, CBS and NBC have ignored a major news story that could be embarrassing to Hillary Clinton and have national implications, while promoting a negative (and trivial) Trump story initially pushed by the Clinton campaign.

On September 23, news broke that during the now-infamous investigation into Clinton’s emails, the FBI granted Clinton’s former chief of staff Cheryl Mills immunity. House Oversight Chairman Jason Chaffetz called Mills’s immunity “beyond explanation,” adding that “the FBI was handing out immunity agreements like candy.” Yet, neither ABC, CBS nor NBC ever even mentioned this story once.

But the same networks that have failed to cover the Mills story since it broke on September 23 were quick to devote a full 19 minutes and 40 seconds to the controversy over Trump allegedly calling a former Miss Universe “Miss Piggy” and “Miss Housekeeping.” The networks began covering this 20-year-old incident after Clinton brought it up in her remarks during the debate on Monday night, and then exponentially increased their coverage when Trump attempted to defend himself on Fox News’s Fox & Friends on the morning of September 27.

On September 27’s edition of World News Tonight, correspondent Cecilia Vega described the former contestant (and Clinton supporter) as an “instant cause célèbre.” On NBC’s Today on September 28, co-host Matt Lauer, echoing Bloomberg Politics’s Mark Halperin, mused that the Miss Universe debacle was “going to be more than a one or two-day story” – as if journalists had no control over how long a story would be discussed. 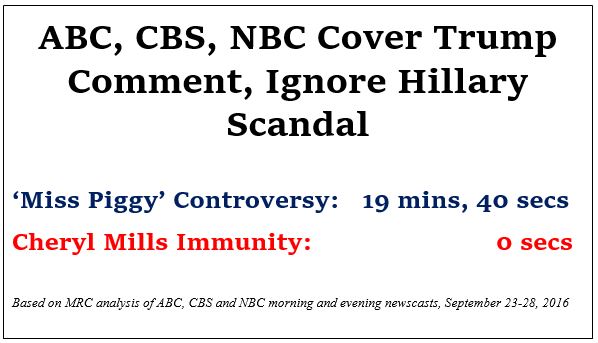 According to a summary of the Mills incident written by Andrew McCarthy for the National Review, “[t]his is very strange. There was no need to grant concessions to Mills. The Justice Department could have required the production of the computer by simply issuing a grand jury subpoena. And had there been any concern that Mills would not cooperate, would destroy the computer, or would “misplace” it (as Team Clinton claims to have misplaced so many Hillary devices), investigators could have applied for a search warrant and seized the computer.”