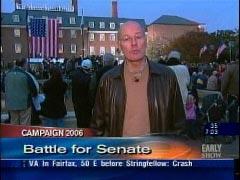 Nasty and bitter is how the Virginia and New Jersey Senate races were described on Monday’s "Early Show" on CBS. No not necessarily the campaigns in general, but the Republican candidates and Republican ads. Additionally, Harry Smith highlighted that while Northern Virginia is "Webb country," the rest of Virginia "clings to its conservative roots." Notice how Smith omits the phrase "liberal" while commenting on Northern Virginia.

Smith noted how the Virginia race is "mean" and "nasty" before remarking on Allen’s gaffes and how they have kept this race close:

Harry Smith: It's been mean --

Harry Smith: "It's been nasty. On one side, Senator George Allen. His presumed re-election to the Senate was to give him a jumpstart on a run for the White House. But Allen's mouth kept getting in the way. His campaign stumbles created an opening for Jim Webb. A former Secretary of the Navy and former Republican."

Surprisingly, there was no mention of any of Jim Webb’s gaffes, particularly denying that an act described in one of his books is not sexual in nature. But, Smith later asserted that the race will be determined by voter turnout, and who votes: the Webb friendly Northern Virginia or the conservative rest of the state:

"Who wins may well be determined by which part of the state gets out the vote. The boom towns of Northern Virginia, NOVA, is Webb country. But, in the rest of the Virginia, ROVA, Republicans cling to their conservative roots." 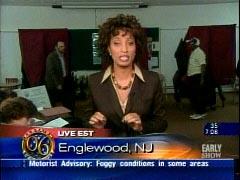 "But, in the last several weeks, Kean, the son of a popular former governor, has narrowed the lead, primarily with a deluge of nasty ads. And the Democrat creating their own anti-Kean/anti-Bush firestorm."

Julie Chen declared the New Jersey race as one of the "nastiest:"

"And in this race it's been one of the nastiest, Rene. What are you hearing from voters as they're going in to vote this morning?"

Syler reiterated the "nasty" theme in her reply:

"Well, I've actually talked to people on their way out and what I've heard has not necessarily been very good. Some of them are just absolutely disgusted by how nasty and bitter and mean this campaign has been."

While the race may have been nasty, the only candidate CBS explicitly accuses of negative tactics is the Republican candidate, Tom Kean Jr. And while CBS played a clip of Kean discussing how he would like to "root out corruption at every level of government," they played this odd clip of Senator Menendez:

"The only candidate in this race for the United States Senate who stood up to a corrupt political regime, testified against it, and been part of creating that change in his hometown and has ever since, is me."

However, CBS  failed to elaborate as to why the corruption issue is a big deal in this campaign, particularly that Menendez is being investigated on corruption allegations.

The liberal democratic agenda of the "Early Show" shined through as its co-hosts painted Republican candidates and campaign tactics as the problem, while remaining silent on the sins of the Democrats.