Transcript of The View’s Behar on the Senator's Stroke: 'Did Someone Do This to Him?' 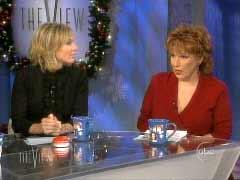 On Thursday’s edition of The View, the ladies, along with guest co-host Dari Alexander of Fox News, discussed Democratic Senator Tim Johnson’s emergency brain surgery and the potential political fallout. Alexander explained to the audience that if Johnson had to resign from the Senate, the Republican governor of South Dakota would pick an interim senator to fulfill the remainder of Johnson’s term, thereby creating the potential for an even split in the Senate between Democrats and Republicans. Joy Behar chimed in and put forth another tin foil hat worthy conspiracy theory:

Alexander joked that perhaps he had been given polonium, referencing the recent death of the former Russian spy Alexander Litvinenko, who accused the Kremlin of poisoning him:

Elisabeth Hasselbeck laughed off Behar’s ludicrous question, referring to her suggestion as a conspiracy theory, but Behar refused to back down:

Elisabeth Hasselbeck: "Let me ask you something. Why is everything coming from the liberal perspective a conspiracy? This is a conspiracy."

Behar: "I know what this–that party is capable of."

The full transcript of the exchange follows below:

Rosie O’Donnell: "His name is Senator Tim Johnson. He’s a Democrat, and sadly he, he was ill, and he’s had brain surgery. They think he may have had a stroke."

Alexander: "And the thing that is quite interesting about this, I think, is that it started this whole political brouhaha because, as you know, the Democrats took over in November by a 51-49 majority, and now if he has to resign, it will make things 50-50, because the governor of that state, who is a Republican, is in, in, he’s in charge of basically putting an interim person in there for, for Senate, and–"

Joy Behar: "Is there such a thing as a man-made stroke? In other words, did someone do this to him?"

Alexander: "Maybe they gave him polonium."

Elisabeth Hasselbeck: "Let me ask you something. Why is everything coming from the liberal perspective a conspiracy? This is a conspiracy."

Behar: "I know what this–that party is capable of."

Alexander: "So, in any case, it started this whole political brouhaha, and you know, I think the thing that's really sad about this is that it takes a political angle when this guy is really critically ill."

Behar: "Yeah, we’re very sad that he’s critically ill, but there are millions and millions of people who depend upon this Congress. People in the world and people in this country. So it’s really–his, his illness is, is sad, but it's not as important in the overall scheme."

Hasselbeck: "I guess it depends on what scheme you’re thinking of."