A Mitt Romney quote circulated by Democrats over the weekend has now been hyped into a "political controversy" by CNN. A liberal journalist and a Democratic strategist first brought the story to CNN on Monday morning, and by Tuesday CNN's Soledad O'Brien brought it up in an interview.

"In the wake of super storm Sandy, a political controversy rages over something Mitt Romney said at a primary debate last year. Did he suggest FEMA should be eliminated?" reported CNN's John Berman on Wednesday's Starting Point.

ESPN's LZ Granderson and Democratic strategist Maria Cardona, liberal guests that appear on CNN to spar with conservatives and Republicans, had first mentioned the quote on CNN on Monday.

Here's what Romney actually said in the debate, concerning the role of FEMA:

"Every time you have an occasion to take something from the federal government and send it back to the states, that’s the right direction. And if you can go even further and send it back to the private sector, that’s even better. Instead of thinking in the federal budget, what we should cut — we should ask ourselves the opposite question. What should we keep? We should take all of what we’re doing at the federal level and say, what are the things we’re doing that we don’t have to do?"

When moderator John King followed up, asking "Including disaster relief, though?" Romney replied:

"We cannot — we cannot afford to do those things without jeopardizing the future for our kids. It is simply immoral, in my view, for us to continue to rack up larger and larger debts and pass them on to our kids, knowing full well that we’ll all be dead and gone before it’s paid off. It makes no sense at all."

Granderson grossly distorted what Romney said, claiming he wants to "take all that money out of FEMA, give it back to the states" and that "having money for FEMA is immoral." Cardona ridiculously declared that "Mitt Romney said flat-out that he thinks that FEMA should be abolished and should be privatized". 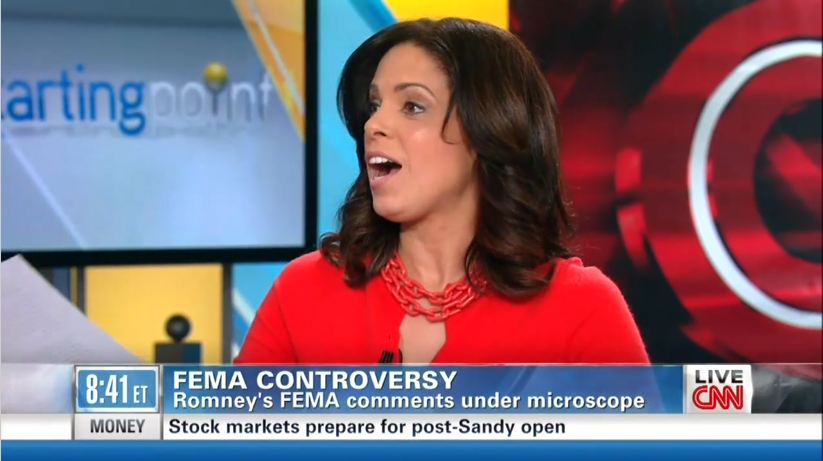 ng it to tee up her Democratic guest to bash Romney on Tuesday.

"[Y]ou're a governor, would it be possible for your state to cover the devastating damage if it had been, let's say, worse in the state of Delaware? As you know, Governor Romney, has mentioned that he thought the states could pick up those costs, and he could remove some of the costs of FEMA from the – from the government, federal government to the states?" O'Brien asked Gov. Jack Markell. He predictably scoffed at that as "ridiculous."

Correspondent Dana Bash talked about Romney's remarks on Tuesday, as well as Jim Acosta, and both said he repeatedly stonewalled the press on questions of the sort about FEMA. And O'Brien hammered the story on Wednesday's Starting Point, devoting two segments to it during the 8 a.m. hour.

"He has not answered that question as reporters pepper him with that. Is that a mistake?" she asked, pressing for specifics on Romney's plan for FEMA – specifics which he never originally gave. Finally, former Republican Governor George Pataki told her "when you are running for president and people are screaming questions at you, stop and answer?"