CNN Panel Whacks 'Out of Touch' Romney for Horse In Olympics

In a move out of the liberal playbook, CNN hammered Mitt Romney on Thursday for appearing out of touch because his horse is competing in the "elitist" Olympic event of dressage.

"He's back here in the United States, preparing to pick a vice president, and possibly trying to avoid charges that a sport involving horse ballet might not make him the most relatable candidate for the average voter," hyped anchor Carol Costello.

How "centrist" is CNN, though, when it is making a similar point as the liberal MoveOn.org which lampooned the Romneys in a TV spot for pampering their horse so much?

"Dressage is not hoity-toity! It is fru fru!" mocked liberal comedian Stephen Colbert in a clip at which Costello laughed. CNN contributor John Avlon called it "the most elitist sport you can come up with" and added that "it's a real fundamental problem because it reinforces that narrative" of Romney looking out of touch with everyday voters.

Liberal panel member Roland Martin tied it into the Obama campaign strategy. "This is precisely why they have painted him [Romney] as a rich, out of touch guy who cannot speak to the everyday voter." 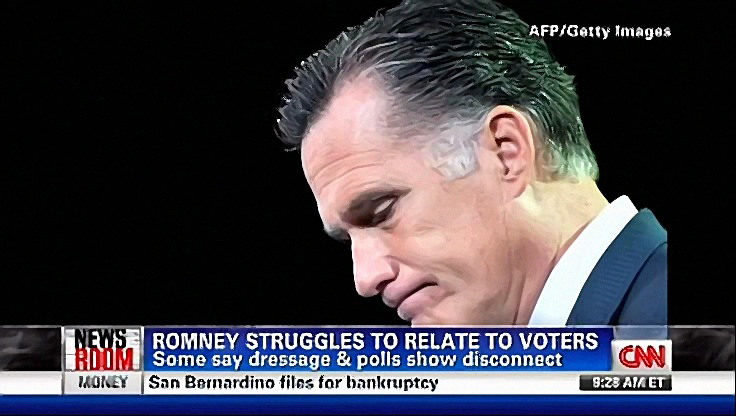 Interestingly, Costello and Martin got into a tussle toward the end of the segment when Costello tried to play devil's advocate.

"In fairness, I remember when Barack Obama tried to bowl during the 2008 campaign. He didn't connect with anyone, because it wasn't quite real. So they both are guilty of this," she stated of the candidates looking out of touch. But Martin retorted that "a bunch of regular people can't bowl," to which Costello responded that she is a "great bowler."

A transcript of the segment, which aired on CNN Newsroom on August 2 at 9:28 a.m. EDT, is as follows:

CAROL COSTELLO: It's a big day for the Romneys as the family horse Rafalca makes its Olympic debut. Ann Romney cheering on the horse she co-owns in London, but where's her husband Mitt? He's back here in the United States, preparing to pick a vice president, and possibly trying to avoid charges that a sport involving horse ballet might not make him the most relatable candidate for the average voter. And things like this don't help.

COLBERT: I expected this from liberals but I did not this from a conservative like Charles Krauthammer.

CHARLES KRAUTHAMMER: I'm not sure why the horse has to be in the most upper class, hoity-toity Olympic event ever invented. It's unnecessary. They are running for the presidency.

COLBERT: How dare you, sir! Dressage is not hoity-toity! It is fru fru! Get your facts straight.

COSTELLO: You just can't help but laugh. Anyway. A new poll shows a majority of voters in three swing states, critical swing states, Florida, Ohio, and Pennsylvania, say Mitt Romney does not care about the needs and problems of people like them. And that is a problem for Mitt Romney. Joining me now John Avlon, a CNN contributor, he's an independent, and Roland Martin, also a CNN contributor, he leans left. Welcome to both of you.

COSTELLO:  Are you? Oh, I can't wait for that. I'm excited for that.

MARTIN: Yeah, what the heck?

COSTELLO: So let me ask you the first question then, Roland. Mitt Romney is here in the United States. Ann Romney is in London watching her horse perform. You know, on a personal level, I'd want my husband to be with me.

MARTIN: Horrible optics. No, no, he shouldn't be there because he is running for president. But it's horrible optics. I find it interesting that if you are conservative you will criticize President Barack Obama for vacationing on Martha's Vineyard, but then you have you this image of Ann Romney and her horse in this particular Olympics. Look, the Obama campaign has done a very effective job of defining the narrative of the kind of guy that Mitt Romney is. We criticize negative campaigning. This is precisely why they have painted him as a rich, out of touch guy who cannot speak to the everyday voter. And so that's going to be a crucial component in the next 96 days.

COSTELLO: Well, John, you knew Roland wasn't going to lean right. So is there another side?

AVLON: Look, I think these negative narratives work best when they rip off something real. And what American doesn't like to kick back with a beer on the couch and watch a little horse dancing? It is the most elitist sport you can come up with. So it's a real fundamental problem because it reinforces that narrative.

COSTELLO: Well, why did they enter the horse in the Olympics?

AVLON: Because this is Ann Romney's big shot to have her horse compete in the Olympics, and –

COSTELLO: But it's her husband's big shot to be president.

AVLON: – when they were registering it, they weren't sure if Romney was going to have the nomination perhaps. It's unfortunate. But this news cycle will not define the election race. But this isn't the conversation they are looking forward to back in Boston.

COSTELLO: Well, Romney did release this new ad, and I want to play it for people. He is in an SUV, in a plaid shirt. Let's watch.

MITT ROMNEY, Republican presidential candidate: My own experience was, I got the chance to start my own business. I know what it's like to hire people and to wonder whether you're going to be able to make ends meet down the road.

Freedom and free enterprise are what create –

COSTELLO: Okay. So this ad will run in the swing state of Virginia, where Romney really needs to win that state. So does this kind of thing soften his image at all? Roland?

MARTIN: They are trying to soften his image, but when he says – because you notice, I started a small business. I hired people. I don't think a small business owner out there will put themself in the same category of a Bain capital. I doubt it very seriously. And, again, one of the things that Romney has always had a problem with, he has always had a problem just being able to sit down and interact and communicate with just regular ordinary voters. Remember in Pennsylvania, when he criticized the cookies of the Pennsylvania bakery? Of course that was owned by a Republican. And so he has to be able to somehow connect that way. But it's difficult. I called him "plastic man" in 2008. And that's part of the problem.

COSTELLO: In fairness, I remember when Barack Obama tried to bowl during the 2008 campaign. He didn't connect with anyone, because it wasn't quite real. So they both are guilty of this.

MARTIN: First of all, a bunch of regular people can't bowl. But my point is, is how you communicate –