CNN Analyst: I Was 'Too Kind' To Call Trump 'Leader of a Terror Movement'

At least, if you ask CNN's "national security analyst" Juliette Kayyem, a former Obama DHS assistant secretary. Appearing on Thursday morning's New Day, Kayyem said that when a year ago in an Atlantic article she depicted Trump as "the leader of a terror movement," she was, as she recently tweeted, actually being "too kind" to him!

Perhaps realizing just how outrageous was Kayyem's accusation, substitute host John Avlon tried to soft-pedal it. He framed it as his Kayyem calling Trump head of an "extremist" movement, not a "terror" one. Avlon went on to ask what she would call Trump now, if she was being "too kind" a year ago. She needed one of his so-called "Reality Checks."

Kayyem couldn't come up with anything to top accusing Trump of heading a "terror movement," but continued to claim that he was employing "terrorism" for political ends. Has anyone seen a MAGA suicide bombing after January 6? Another riot at the Capitol? If anything, this threat should be seen as diminishing all year long. 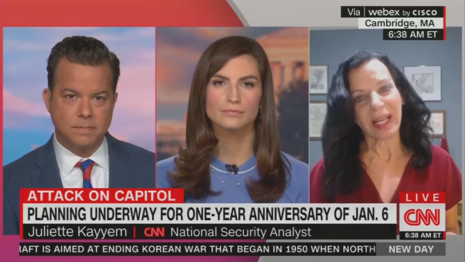 Kayyem applauded Trump's social-media deplatforming, and the prosecution of people involved in the January 6th riot, because they are "undermining [Trump's] ability to recruit" and to "engage and incite."

Far from challenging Kayyem's extreme views, Avlon was curious as to what needs to be done to "break up" Trump's movement.

Kayyem suggested a two-pronged approach. First, "criminal accountability" for Trump and others. She then reverted to hailing the prosecution of the January 6th rioters as diminishing "Donald Trump's ability to gather a crowd that is willing to be violent." This ignored that a big chunk of the people prosecuted were non-violent and were charged with trespassing and "parading" in the Capitol.

Note: Kayyem has a history of blatant Democrat partisanship. In 2020, NewsBusters caught Kayyem hailing Andrew Cuomo's "leadership" in fighting the coronavirus. Leadership? Like causing the deaths of thousands of seniors by forcing nursing homes to take in people infected with the virus?

CNN analyst Juliette Kayyem saying she was being "too kind" in calling Donald Trump the leader of a "terror movement" was sponsored in part by The Farmer's Dog and  GlaxoSmithKline, maker of Nucala.

JOHN AVLON: Let's bring in CNN national security analyst Juliette Kayyem. Julietter, good to see you this morning. I notice you tweeted this Atlantic article you wrote after the January 6th attacks, almost a year ago, saying this: "As we gear up for 1/6 anniversary coverage, reposting my take then, many criticized this for calling Trump the leader of a terror movement who uses violence or threat of it as an extension of politics. After a year, I think I was too kind."

So if you think you were too kind to call him an extremist leader then, what would you call him now?

JULIETTE KAYYEM: Well, he continues to be the leader of an organization that uses violence or the threat of violence to disrupt democratic processes. That is terrorism.... What sort of connects everything is violence and the threat of violence that now animates so much of our political discourse coming from Republican leadership, from right-wing media. And it's not just, you know, sort of random violence. I mean, it is targeted against secretaries of state, against various congresspeople. Of course, we see it percolate into the COVID space, against the attacks, or language against leaders. And so it's that acceptance of violence and the threat of violence as part of a political agenda that I think I underestimated on January 6th.

There are 600 or 700 criminal cases against the people who were in the Capitol. Why does that matter? Well, it matters because they did something wrong, and a lot of them are getting jail time. It also matters from the counterterrorism perspective, the world that I grew up in. Which is if you view Trump as leading a terror movement, we are, these cases are undermining his ability to recruit, to raise money. And you're seeing that. You're seeing organizations like the Proud Boys, very difficult for them to reform. Trump has been deplatformed by Twitter. He cannot fill a room. Let's remember that. He is having these rallies. They are not filled up, you know, to the rafters. That's a good thing. You want to minimize his capacity to both engage and incite.

AVLON: Juliette, I've got to ask, what accountability do you think needs to be put in place to break up this movement, as you describe it?

KAYYEM: In terms of accountability, I think people need to view it into two lanes. So, one is the criminal accountability of Trump and members who were -- and people who planned a violent overthrow of our democracy. That's what it was. We shouldn't be shy about what they were trying to do. It's clear that's what they were trying to do. And their criminal culpability.

The other, of course, trying to minimize the radicalization. That's really key for the long term. And I think there are hints that is happening. These cases are breaking up terror organizations. Donald Trump's ability to gather a crowd that is willing to be violent is now much less than it was a year ago. That's good. That's good news. I mean, it's not great news given the context. But that is the kind of thing that we need to be looking for in terms of trying to bring the temperature down.