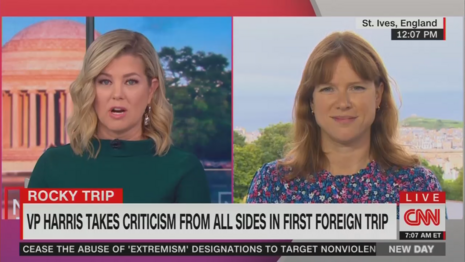 Imagine you're a legit reporter given the opportunity to interview Biden's Communications Director about Kamala Harris's recent trip to Guatemala and Mexico, the putative purpose of which was to address the border crisis. Surely the first questions you'd ask would be along the lines:

"Does President Biden want Harris to visit the border? If so, why hasn't she visited, and when will she? If he doesn't want her to visit, why not?"

Trick question: we said "legit" reporter. And thus it was predictable, if no less outrageous, that when CNN's Brianna Keilar interviewed Comms Director Kate Bedingfield on this morning's New Day regarding Harris's recent trip, she never asked about Harris's failure to visit the border. Instead, after Kate kvetched that "conservative Republicans and right-wingers love to attack on this issue," Keilar sympathetically responded:

"She has taken a lot of incoming from the right . . . We do have some reporting that Republicans have been frustrated, that none of their attacks are really sticking to the president. They see opportunity in attacking Vice-president Harris. Why you do think that is?"

That gave Bedingfield a chance to brag about the supposedly "incredible progress" that Biden/Harris have made on various fronts, and to tell Keilar that she'd have to ask conservatives why they're singling out Harris for attacks.

Failing to ask Bedingfield about Harris's failure to visit the border was journalistic malpractice per se -- but just SOP for the liberal media.

Note: Keilar got her questioning off to a sloppy start by saying that Harris had made a trip to "South America." Pro tip: Guatemala and Mexico are in North America.

CNN's Brianna Keilar failing to ask Biden aide Kate Bedingfield about Kamala Harris's failure to visit the border was sponsored in part by Lexus and Uber.

BRIANNA KEILAR: I want to turn and talk about another important foreign trip, which was the Vice-president's first foreign trip, where this was to South America as she's training her eye on root problems behind the immigration crisis. White House sources tell CNN they're perplexed by her border answers. What do you say to that?

Conservative Republicans, right-wingers, love to attack on this issue, right? But this is a moment for people to come together, for us to find practical, bipartisan solutions.

KEILAR: She has taken a lot of incoming from the right. I will say that in itself is not a reason to not ask questions about how she has done on this trip. But, you know, we do have some reporting that Republicans have been frustrated, that none of their attacks are really sticking to the president. They see opportunity in attacking Vice-president Harris. Why you do think that is?

BEDINGFIELD: Well, I think that the fact that President Biden and Vice-president Harris have been able to make incredible progress in their first now almost 150 days in office, getting a vaccination program stood up and --

KEILAR: But why her instead of --

BEDINGFIELD: -- and vaccinating Americans at a rapid pace.

KEILAR: But why her, why her, Kate, instead of him?

BEDINGFIELD: Well, that's a question you'd have to ask them, Brianna!