On her MSNBC show, Friday, Nicolle Wallace, after boasting, "I've spent my career studying public opinion," said that independent/swing voters will be "a whole lot more likely" to believe what Nancy Pelosi says about impeachment when they hear Mitt Romney saying the same thing.

Wallace offered her take after liberal Sam Stein expressed doubts that Trump supporters will be moved to support impeachment, since in these "tribalized" media times, they will get their news from people who will "affirm and harden" their viewpoint.

So far, Romney has pronounced himself "deeply troubled" by the Ukraine situation, and has refused to rule out impeachment. If and when Romney forthrightly declares himself in support of impeachment, it is sure to warm the cockles of liberal hearts, and be big breaking news in the MSM.

But how will it move the rest of the country?

SAM STEIN: I don't--I think no one knows this answer, and certainly not me. Is where does it go from here in terms of public opinion, because we are in such a tribalized society, and our media ecosystems are so tribalized too, that if you believe that the President is being unfairly targeted, you're not going to get your news from the Nightly News. You are going to get it from people that echo your viewpoint. And it’s just going to affirm it and harden it. So, those numbers [showing 43% support for impeachment], I don’t know if they’re a floor or a ceiling. But if you’re the White House, and you were banking on this being such a political winner, I'm just not, I guess I just don’t see it at this point. It could change: I just don't see it right now. 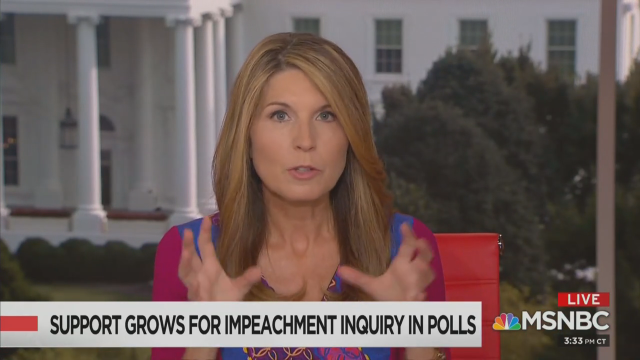 NICOLLE WALLACE: Mitt Romney doesn’t see it either. I think when you look at public opinion, I always thought the most devastating thing for Hillary Clinton was that Bernie Sanders from the far, far left said the same things about her that Donald Trump said from the far, far right. And I’ve spent my career studying public opinion, and the most credible messages are the ones echoed from both sides of the political spectrum. So if independent voters, swing voters, the kind of voters that have fled Donald Trump since his election, the ones that gave Democrats their big wins in the 2018 midterms, if they see Mitt Romney saying the same thing as Nancy Pelosi, they’re a whole lot more likely to believe it.