Remember Carole Simpson, the ABC "reporter" who got all verklempt when she had the chance to interview then President Bill Clinton in 1999?  Simpson so embarrassed herself that she made MRC's "Worst Media Bias" list for that year.

Fast forward 13 years to this morning, when Melissa Harris-Perry had a Carole Simpson moment of her own.  On her MSNBC show, revealing that she recently had the chance to interview President Obama for the current issue of Ebony magazine, Harris-Perry could not restrain her enthusiasm, actually letting go with a "woo-hoo-hoo!" among other expressions of excitement.  View the video after the jump. 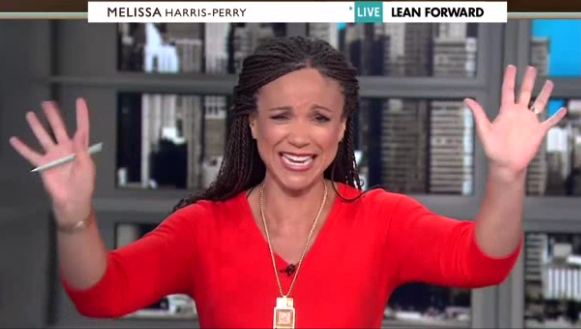 Watch MH-P get as giddy as a pre-teen at a Justin Bieber concert.  We can only imagine the hard-hitting "journalism" that took place in that Oval Office interview.  Could there be a 2012 Worst Media Bias award in MH-P's future?

MELISSA HARRIS-PERRY: When we come back, I am going to get to finally spill the beans about a really amazing interview I conducted. I have been dying to tell you all about this.  Woo-hoo-hoo! I'm excited.

[After returning from break] In 2008 he bested John McCain by more than 90 points among a black electorate which accounted for more than 12% of the overall vote, according to exit polls.  And yes, African-Americans gave the president's opponent, Mitt Romney, zero percent in an August NBC poll. Always remember, that was a percent, not a raw number.  But, should they help to bring about a second Obama term, what can the president's most dedicated supporters expect, and how would that second term help to improve the lives and conditions of African-Americans?  Those are two of the many questions which I ASKED THE PRESIDENT--WOO-HOO! In a new interview out in this week's Ebony magazine's November issue—maybe I shouldn't be that excited about the fact that I got to interview with the president, but I was in the Oval Office and it was completely exciting, but I had to keep quiet until it was on newsstands, which it is now.