The problem with Chris Matthews playing footsie with the idea of running for US Senator from Pennsylvania: when he says something nowadays, how can you tell whether he means it, or is just trying to position himself for a possible run?

Take this evening's Hardball, during which Matthews castigated Joe Lieberman as having been a "terrible" running-mate for Al Gore in 2000. Kiki McLean, a senior Clinton advisor, was Chris's guest. McLean mentioned that she had been an aide to Lieberman in 2000, and to Gore when he was the Veep candidate [1992?]. That set Matthews off.

CHRIS MATTHEWS: How come you did such a good job with Gore as a running-mate and such a terrible job with Lieberman? He wouldn't even criticize Cheney. He looked like he was trying to join Cheney's club.

MCLEAN: You know what? I think Joe Lieberman did a great job --

MATTHEWS: He was a terrible running-mate. Terrible.

MCLEAN: I think you're really --

MATTHEWS: He delivered not a single state for the ticket. He did not help Al Gore carry a single state. Name the state that he helped him with.

MCLEAN: I think we won the election. I think most Americans would tell you--

MCLEAN: that Al Gore and Lieberman got the election.

MCLEAN: I think he put Florida in play for us before it even became a controversy. I think Joe Lieberman was a terrific running-mate. And he and Al Gore had a lot of respect for one another's history and their work together, and they won that election. That was a successful pairing.

MATTHEWS: A flat-out disaster that one was; Gore was a great one.

Maybe Matthews was being candid. But if you're a prospective Democrat office-seeker looking to ingratiate yourself with fellow partisans, it certainly can't hurt to take a shot at Joe Lieberman, the renegade who's endorsed John McCain. 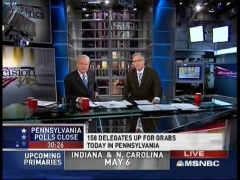 Matthews is co-anchoring this evening's PA primary coverage with Keith Olbermann. At one point, Matthews declared that it was 8 o'clock and that the Pennsylvania polls had closed. There was only one problem: it was only 7:30 and the polls were open for another 30 minutes, as you'll note in the screencap. After throwing it to David Gregory's panel for some more schmoozing, Matthews returned and informed viewers that the polls were in fact still open, but didn't mention his earlier gaffe.