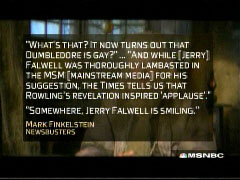 Like a youngster stubbornly unwilling to admit that the Tooth Fairy isn't real, Keith Olbermann seems unable to accept that Tinky Winky is gay. Perhaps the MSNBC host should check with some of his more sophisticated friends.

On last night's show, Olbermann imagined he was having fun at this NewsBuster's expense, mocking my item from earlier this week, Gay Dumbledore: Somewhere, Jerry Falwell Is Smiling.

It's not that I share much of Falwell's religious philosophy. Not that many guys born in the Bronx named Finkelstein do. But I thought the reverend had gotten a bum rap with the ridicule the MSM heaped on him for his suggestion that TeleTubby Tinky Winky was gay. Falwell was derisively treated as a paranoid zealot. A TeleTubby representative went so far as to label Falwell's notion "outlandish, absurd and kind of offensive."

In other words, only a Christian conservative crank could possibly believe that there were undisclosed gay characters in pop-culture materials for children . . . until J.K. Rowling came along and disclosed that Dumbledore, the Hogwarts headmaster in her Harry Potter series, was gay.

Does this prove that Tinky Winky is too? Of course not. But it does suggest that there was nothing intrinsically absurd in Falwell's suggestion. But that didn't prevent Olbermann from perpetuating the negative portrait of Falwell. Here's what he had to say last night:

KEITH OLBERMANN: The choicest commentary [came] from the conservative blog NewsBusters, in an entry by regular columnist Mark Finkelstein, the sometime Republican chairman of Tompkins County, New York. That's where Cornell [Keith's alma mater, like mine] is, so trust me he does have a lot of spare time, as you'd guess. "What's that?" he writes, "it now turns out that Dumbledore is gay? And while Falwell was lambasted in the MSM," that's mainstream media, "the Times tells us that Rowland's revelation inspired applause? Somewhere Jerry Falwell is smiling." You may vaguely recall that among Reverend Falwell's more serious disturbances of the peace, he insisted that the TeleTubby Tinky Winky was gay.

For the record, it's been a few years since I've been Tompkins GOP chairman; I'm a vice-chair nowadays. For those not intimately familiar with our area's politics, Keith's point was that due to the presence of Cornell [and Ithaca College], Tompkins [county seat Ithaca] is a liberal bastion where there isn't much to keep a Republican busy. I don't know about that: all the more minds to change, you might think.

But let's return to Keith's suggestion that for Falwell to have "insisted" that Tinky was gay amounted to a "serious disturbance of the peace."

Odd that Olbermann would still be ripping the reverend, given that Tinky's gayness is now widely accepted. Even at the time Falwell initially made his assertion, there was at least one fair-minded voice on the left stating there was nothing absurd about it. No less than Slate editor Jacob Weisberg, the man who brought us "Bushisms" and who has since stated that it is reasonable to oppose Mitt Romney because of his Mormonism, wrote at the time:

The reaction to the Rev. Jerry Falwell's outing of Tinky Winky, the purple Teletubby, was widespread scorn and hilarity. Comedians and column writers mercilessly ridiculed Falwell for his paranoia in seeing gays under the crib.

Three comments in defense of Falwell: First, he didn't write the article in question, which appeared unsigned in National Liberty Journal, a magazine he publishes. When asked about the charge, Falwell said he had never seen Teletubbies and didn't know whether Tinky Winky was homosexual or not. The notion of Falwell attacking a cartoon character is too appealing to liberal prejudices to be easily abandoned.

Second, if you've ever watched Teletubbies, you might well suspect some kind of subliminal messaging. The four tubbies have aerials coming out of their spacesuit hoods, which receive programming that's broadcast on TV screens in their tummies. As they prance out of their bunker and around the strange, apocalyptic landscape where they live, periscope speakers pop out of the ground and feed them orders. It's both cute and creepy.

Third, the folks at Liberty College apparently got their idea about Tinky Winky not from watching the program but from reading such publications as the Washington Post and People. On Jan. 1, the Post included "TINKY WINKY, THE GAY TELETUBBY" in its annual list of what's "in" for the New Year. No one got excited. The press, including the Post, then mocked Falwell as a reactionary hick obsessed with the sexuality of puppets. Seems like a bit of a trap.

Even closer to Keith's home, have a look at this excerpt from "Falwell comes late to Teletubby psychobabble," a Cox Newspapers story which was posted at gfn.com, which describes itself as a "professional LGBT website."

In April 1998, PBS brought the Tubbsters across the Atlantic, figuring, correctly, that they were the next Barney (last year, sales of Teletubby merchandise passed Barney and were second only to ``Sesame Street'' among PBS kids' shows). And almost immediately, Internet posters picked up the debate over whether TW is gay, or at least if he could be considered gay.

Michael Musto, gay nightlife columnist for Village Voice, certainly thought so back in April 1997, and this year The Washington Post matter-of-factly called TW ``the gay Teletubby'' in an in-and-out list (not who's in and out of the closet).

And who is Michael Musto, in addition to being the gay nightlife columnist for the Village Voice? Why, he's also a regular, revered guest on . . . Countdown with Keith Olbermann. Keith, why not give Michael a call? For that matter, you might have some explaining to do. Musto might be miffed at your notion that assertions of Tinky's gayness constitute a "serious disturbance of the peace." Some might even say that that Olbermann's obstinate denial might be seen as, dare I say, homophobia ;-)

Update 11-01: During tonight's ESPN broadcast of the Virginia Tech-Georgia Tech football game, at about 11:03 in the fourth quarter, Chris Fowler had this to say to his broadcast-crew mates about Georgia QB Taylor Bennett dressing as Tinky Winky for Halloween:

"It's been an interesting week for Bennett, guys. You know what he went as for Halloween? Tinky Winky, the purple TeleTubby, the one that has the triangular antennae and carries a handbag. It takes guts to dress as Tinky Winky on Halloween and you're the starting quarterback."

Bad news, Keith. Looks like your old stomping grounds of ESPN, owned by Disney, is collaborating in Falwell's "serious disturbance of the peace" by suggesting that Tinky Winky's gay.