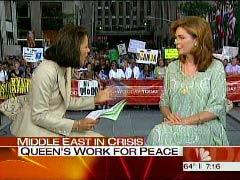 Bring back Katie! OK, perhaps that's not the solution, but the sycophantish display that Ann Curry put on for Queen Noor and her anti-Israel/pro-Hezbollah views was enough to make you pound the TV screen in frustration.

Noor is a Princeton-educated Arab-American who is the widow of the late King Hussein of Jordan. Curry's opening set the tone. Rather than asking a probing question, Ann invited Noor to lecture America: "what insights might you offer America about what Hezbollah wants and what it's willing to do to get it?"

Noor blamed the Jews and lauded Hezbollah: "Hezbollah was created as was Hamas in the Palestinian territories during a period of Israeli occupation which is on-going in the Palestinian territories and in Lebanon. Hezbollah was largely responsible and credited by the Lebanese for having creating the pressure for having Israel withdraw from Lebanese territory."

Curry took Noor's notion a grotesque step further: "So it's almost seen as a savior."

Even Noor balked at Curry's unfortunate choice of words: "It's perceived as a legitimate resistance movement to Israeli occupation and Israeli holding of thousands of prisoners, Lebanese and Palestinian."

Continued the Queen: "The militant arm [of Hezbollah] can be . . . reduced and can lose its reason and legitmacy if the occupation of Lebanese land is turned back, the Israelis now withdraw there is an immediate ceasefire and there is attention paid to the prisoners issue."

Curry jumped in to make clear that the 'prisoners issue' had to be seen from the Hezbollah perspective: "you're talking about the Lebanese prisoners being held in Israeli jails and that is why Hezbollah said it crossed the border."

In a bizarre twist, Noor then actually took her cue from Curry, attempting attempted to justify Hezbollah's kidnapping of Israeli soldiers: "Kidnappings like that had resulted in prisoner exchanges. That seemed to be the only way they could address this issue, by these kidnappings. The same thing in the Palestinian territories. It's important to understand that even though the loss of civilian life on both sides is unacceptable and against all humanitarian law, nonetheless, these groups have not found the political process to be successful . . . If the Israeli occupation of Arab lands ceases, according to the U.N. Security resolution since 1967, if those are finally implemented with the political will of the United States and the international community, then you start to drain out support for legitimacy and the reason for being of the militant arms of these groups that are also political presences in those governments."

Seconding Noor's notion of draining support for the terrorists, Curry 'helpfully' interjected: "The power." Translation: if only Israel could be forced to end its occupation, those poor terrorists - who really have had no alternative but to murder innocent civilians - would lose some of their power.

You might have expected Curry to ask how the conflict can be resolved given that Hezbollah and Hamas continue to call for the destruction of Israel, and Hezbollah's patron Iran calls for Israel to be wiped off the map. But no, just murmurs and sighs for Noor's one-sided take on the conflict. Ann's performance reached its fawning apotheosis when, in thanking Queen Noor at the end of the interview, Curry offered Her Majesty a brief but remarkable bow of the head.

The screen graphic beneath Noor said it all. For NBC and the Today show, bashing Israel and rationalizing Hezbollah's terrorism is 'working for peace.'