Milbank Mocks W on His Birthday: Youthfulness Not Due to 'Clean Living in 70's' 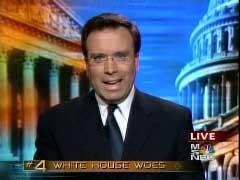 It's one thing for Keith Olbermann to take snide shots at President Bush. He doesn't hold himself out as an objective journalist, after all. But Dana Milbank is, in theory, not a partisan commentator but a national political reporter, repeat, reporter, for the Washington Post. Milbank is a man who has written that his only bias is for 'mainstream news' and that he is sees his role as 'gathering and reporting facts.'

Yet in his interview on last night's Countdown, it was Milbank [shown in an NB file photo] taking some of the nastier jibes at W on the occasion of the latter's 60th birthday.

Olbermann rather benevolently remarked that Pres. Bush "does not look 60. He does not seem to have aged as much as a lot of other presidents have during their time in office. Do we attribute that to something in particular? His physical fitness regimen, the strength of his convictions? Not having sleepless nights?"

When he asked "why doesn't he look at bad as other presidents who have been through the mill for five years?", Milbank shot back snidely:

There was more: "Here's a guy who can take off the month of August, he can have work-outs during the midday right outside the office and you can take naps whenever you like and duck out of a meeting at 8:30 in the evening to go to bed." We get it, Dana.

Olbermann: "The first President Bush is known to celebrate milestone birthdays by jumping out of planes, any indication the son will follow in those footsteps?"

Milbank: "Possibly. But the first President Bush was reenacting his wartime experience so if this president reenacts his military experience maybe he won't show up for a dental appointment." A not-so-subtle embrace of the AWOL theory of W's National Guard service.

Milbank also spun W's invitation to members of the press corps who shared the same birthday to join him on the podium as a metaphor for a lonely and isolated Bush looking for friends. Dana, I'm going out on a limb and guessing that W celebrated his birthday in other ways, surrounded by lots of friends. But leave it to the MSM to turn even a good-natured gesture into a negative.

Not that we had any illusions about Milbank. After all, this is the fellow who, during the Cheney shooting flap, turned up on Olbermann's show in full hunter-orange gear. Dana Milbank: objective gatherer and reporter of news. Right.