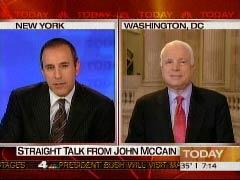 John McCain is a straight talker. You can take it to the bank. Assuming, that is, that you're willing to rely on the Today show's say-so. During much of McCain's interview with Matt Lauer this morning, Today 'helpfully' displayed the legend "Straight Talk from John McCain." Guess that wraps it up - the man is as square a shooter as the day is long!

Some of us watching the interviewing might otherwise have thought that John McCain was positioning himself to run for president as the Know-Nothing candidate.

Lauer's opening question: "So is it domestic spying or a terrorist surveillance program?"

McCain: "I don't know," he said with a laugh, "that's why I'm glad the president said he welcomes hearings."

Carefully honing his man-in-the-middle image, McCain then threw a bone to supporters of the president and the NSA program: "It's important to note that members of Congress including Democrats were briefed on this program and there didn't seem to be at least any public outcry until recently."

Lauer tried to burst McCain's above-the-fray bubble; "Well, when you were asked whether you thought the program was legal, you said 'you know, I don't think so, but why not come to Congress and sort it out.' So the part where you said 'I don't think so,' you think the President broke the law?"

And when it came to the resolution adopted by Congress in the immediate wake of 9/11, authorizing the president to fight the war on terror, McCain - surprise - "did not know" that authorizing the surveillance was part of it. McCain repeated his pitch for hearings, and for good measure threw in one more "I don't know," this time with respect to the scope of the surveillance program.

Asked about the Alito confirmation process, McCain could have criticized the Dems' tactics, but chose instead to indulge in a bit of hand-wringing over the "partisanship" on display without singling out any individual or party. How's that for a profile in courage?

Talk inevitably turned to McCain's presidential ambitions, with Lauer asking whether McCain's health history would play a role in his decision to run.

For once, McCain took an unequivocal position: "my health is very good." He added: "I'm older than dirt, got more scars than Frankenstein, but have learned a few things along the way."

Sure sounds like a guy keeping his Know-Nothing powder dry.

Lauer rewarded him with a chuckle and the declaration that his "older than dirt" line was "the quote of the day."