Bias and Banality on the Morning Shows 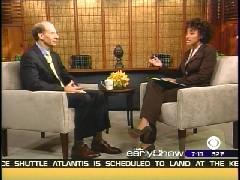 A couple of snippets from this morning's "news" segments on ABC and CBS...

On The Early Show, Rene Syler interviewed the President of the Council on Foreign Relations, and former Bush administration official, Richard Haass. After having played the video of Chavez calling Bush "the devil," of crossing himself and saying that he could still smell the sulfur in the air, Syler's first question for Haass, her first question on this head-of-state behaving that way on the world's primary diplomatic stage?

"Let's start with those comments by Hugo Chavez yesterday. He makes this personal attack on the president calls him the devil a number of times. Is that appropriate?"

What, Rene -- you couldn't figure that one out for yourself? 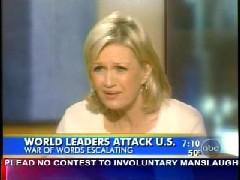 OK, that was not a particularly biased comment. Just a clueless one. But over on ABC, at just about exactly the same time, they were also talking about Chavez' speech. And Diane Sawyer brought back to us those insightful words from Jeanne Kirkpatrick, 22 years ago. The Democratic party had just nominated Walter Mondale at their convention in San Francisco, and the Republicans were convening in Dallas. Kirkpatrick took to the stage, and in her speech she coined a new term - the "blame-America first Democrats."

"When Marxist dictators shoot their way into power in Central America, the San Francisco Democrats don't blame the guerrillas and their Soviet allies. They blame United States policies of 100 years ago. But then they always blame America first."

And it stuck. For a reason. As Diane Sawyer demonstrates again today, on Good Morning, America.

"But a lot of people felt blindsided by this, in a way, because they say we understand that the Arabs and we may seem like adversaries in some situations, but Venezuela? What did we do to Venezuela?"

The video snippets are available here (Syler) and here (Sawyer).