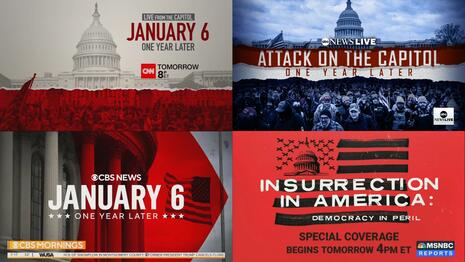 In an effort to push the Democratic Party agenda on the federal takeover of elections and hype an anti-Republican campaign narrative ahead of the 2022 midterm elections, leftist media outlets have planned an avalanche of special coverage commemorating the one year anniversary of the January 6th Capitol Hill riot.

On Wednesday, network hosts eagerly announced plans to anchor live from Washington, D.C. on Thursday, while cable channels promised to devote hours of air time to the topic.

“You’re going to be live from the nation’s capital tomorrow, right?,” Today show co-host Craig Melvin remarked to fellow host Savannah Guthrie Wednesday morning. Guthrie proudly confirmed: “Yeah, heading to Washington later today and we’re going to take an in-depth look at the insurrection one year later. We’ll talk to Capitol Police officers who faced down those rioters and Congresswoman Liz Cheney, the Republican Vice Chair of the House committee investigating the day’s events will be our live guest.”

Over on ABC’s Good Morning America, co-host Robin Roberts urged viewers to tune in for a day-long marathon of coverage (8:00 am to 7:00 p.m.) on the network’s streaming channel: “And we invite everybody to tune in to ABC News Live tomorrow as we are looking at the attack on the Capitol one year later.”

And a reminder, tomorrow on CBS Mornings, we will have extensive coverage of the January 6th anniversary. One year later, here we are. I’ll anchor from the Capitol and our reports will take a closer look at the attack and also the investigation that followed, an ongoing investigation. We’re going to hear from Americans whose faith in our democratic institutions themselves have been shattered.

Fellow co-host Gayle King couldn’t wait: “I’m so glad you’re going to be there. Because a year later, Tony, there’s still so much more to this story, so much we still don’t know. So many questions.”

While later anchoring his 11:00 a.m. ET hour show on MSNBC, Melvin made it clear how partisan the media spectacle would be:

And by the way, tomorrow, of course we will have special coverage all day to mark one year since the attack on the Capitol and an attempt to overturn our democracy. Our coverage will include a look at the Republican Party’s role in the events, the aftermath as well on Deadline: White House, followed by live coverage of the prayer vigil on the Capitol steps. That’s going to start at 4:00 p.m. Eastern here on MSNBC.

The sensational graphic on screen blared: “Insurrection in America: Democracy in Peril.”

CNN outdid all of its competitors by airing a highly-produced promo during New Day that looked more like a movie trailer than a news programming note about its prime time special from 8:00 to 10:00 p.m.. The announcer breathlessly proclaimed:

CNN exclusive: Inside the U.S. Capitol on the anniversary of January 6th. The police, the lawmakers, and the leaders fighting for accountability. An unprecedented gathering, untold stories, and what must happen next to defend democracy. Jake Tapper and Anderson Cooper host, Live From the Capitol, January 6: One Year Later. Tomorrow at 8.

Given the media promotion of the day like it’s the Super Bowl, viewers can likely expect more partisan histrionics than fact-based substance in the deluge of coverage.