As NewsBusters has documented, reporters immediately began tearing their hair out over former Starbucks CEO Howard Schultz announcing on Sunday that he was considering an independent run for president. The video that follows is just a sampling of the liberal press denouncing the possible move as “disastrous” and “catastrophic” for Democrats seeking to defeat President Trump in 2020.

Even as Schultz discussed his potential White House run on CBS’s 60 Minutes, reporter Scott Pelley feared: “Do you worry that you're going to siphon votes away from the Democrats and, thereby, ensure that President trump has a second term?” On Tuesday’s CBS This Morning, the hosts grilled Schultz on whether he would “reconsider” his still-unannounced campaign.

On Monday, the network evening shows saw Schultz “brewing trouble for Democrats” and worried that “he could cost them the White House.”

Here are some of the other media reactions to Schultz’s potential 2020 candidacy:

ANDREA MITCHELL: I think the real other development over the weekend that we can talk about is Howard Schultz.

MITCHELL: He put Democrats in a total panic.

BRZEZINSKI: Some Democrats are uneasy about Schultz’s interest in running as an independent. They’re worried that he could poach voters that would otherwise vote Democrat and ultimately solidify another four years for President Trump.

JOE SCARBOROUGH: At some point, at some point there will be an independent president, sometime very soon, but I don’t know if it’s in 2020 and I don’t know if I would want to be the guy that had the reelection of Donald Trump pinned around – you know, wrapped around my neck, like the albatross I shot, for the rest of my life.

DAVID IGNATIUS: Well, people will be angry at anybody who’s seen as having helped Donald Trump get a second term, with a minority of the country behind him, by running a third party candidacy.

BRZEZINSKI: Seems like a difficult time to run as an independent, Joe, with the risks we have, with Trump.

HALLIE JACKSON: President Trump all by daring the former Starbucks CEO to jump in the race. Why some Democrats worry that’s the worst news for them.

CRAIG MELVIN: And the disrupter. We’ll tell you how a presidential run by former Starbucks CEO Howard Schultz could mean – could mean a win for Donald Trump again in 2020.

MELVIN: How much damage do we think an independent run by Howard Schultz would do to the Democrats? 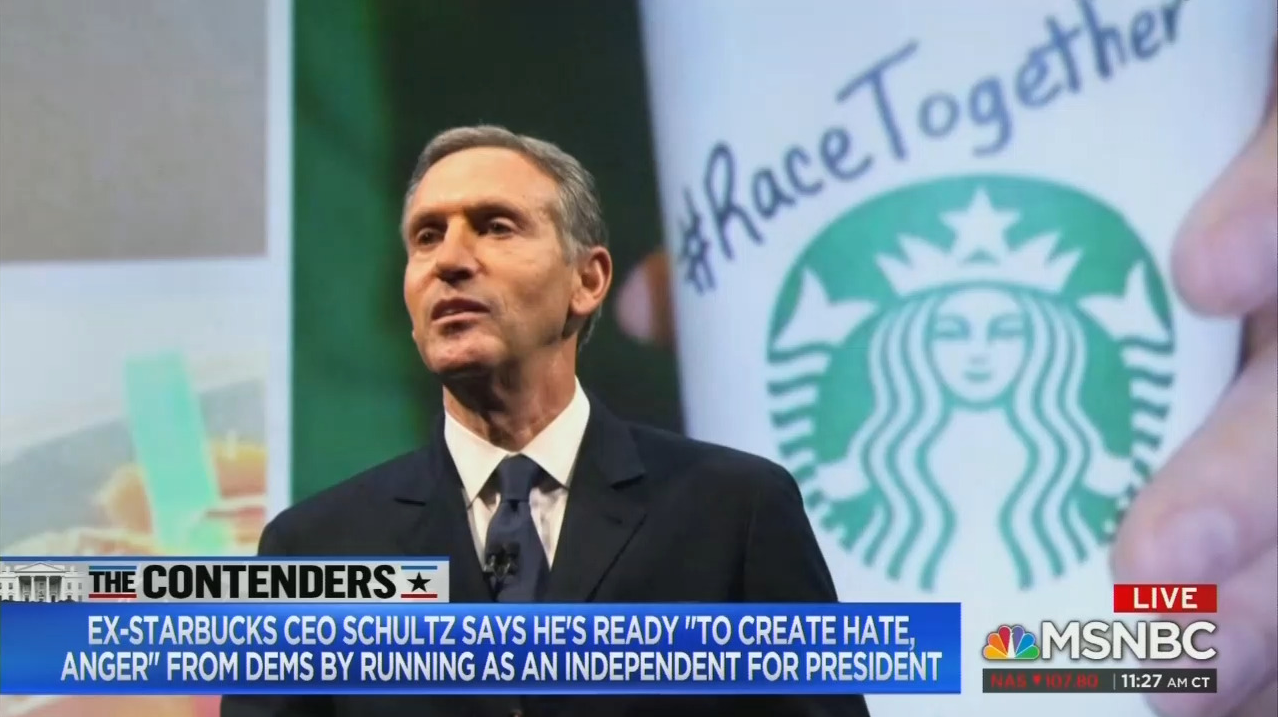 MITCHELL: Former Starbucks CEO Howard Schultz flirts with an independent candidacy, he’s launching a listening tour, and some Democrats, many Democrats fear that could be disastrous for whoever is the Democratic nominee.

ALISYN CAMEROTA:  And former Starbucks CEO Howard Schultz also says he is preparing, possibly, to make a run, but as an independent. And that news is already causing concern among some Democrats who fear an independent bid could split the vote and hand Trump a second term.

JIM SCIUTTO: Let me ask you about Howard Schultz’s possibility of a third party run here. And it was interesting to watch the reaction to that. Enormously negative reaction, particularly from Democrats, even from the Washington State Democratic Party, of course Howard Schultz’s home state of Washington there. Democrats have bad memories. They’ll blame Ralph Nader in 2000, they’ll blame even Jill Stein a little bit in 2016.

TOM LLAMAS: The man who gave us so many choices when it comes to coffee believes Americans want something else when it comes to politics. But some Democrats worry that move will only help President Trump, calling the potential independent bid a vanity project and describing it as a catastrophic mistake.

LLAMAS: But some Democrats worry about his independent bid, concerned it will siphon votes from the eventual Democratic nominee. Former San Antonio Mayor Julian Castro, who already announced his bid, saying this:

JULIAN CASTRO: It would provide Donald Trump with his best hope of getting re-elected.