In a whiny tweet Tuesday afternoon, CNN Senior White House Correspondent Jeff Zeleny complained about President Trump not taking questions from the White House Press Corps as he left for a campaign rally in Florida, even making this completely false claim: “It marks at least a week that he’s gone without answering questions about his Tweets or anything else in the news.” 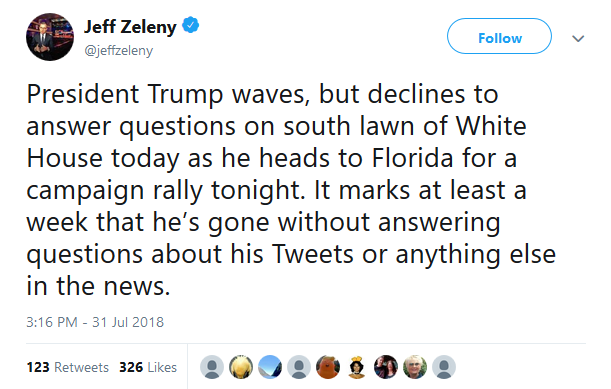 Minutes later, Fox News Special Report anchor Bret Baier called out his media colleague for getting the facts wrong: “Didn’t he just take reporters’ questions yesterday about border policy and funding and Iran at a joint news conference w/ the Italian PM? Both topics he’s been tweeting about.” 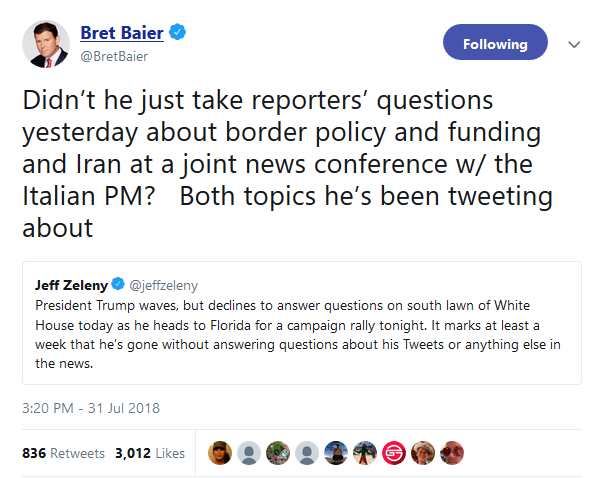 Not only did the president take questions from the press on Monday, but Zeleny was in the room as it happened. After the event, the CNN reporter threw a fit over the fact that he was not called on and blasted the journalists who did ask questions for not hammering Trump about the Russia investigation.

While Zeleny was upset that the president was not being hit with enough hardball questions, one of the most memorable moments from his career was asking Barack Obama what “enchanted” him most about his first 100 days in the White House during a 2009 press conference.

Covering Trump’s Florida rally Tuesday evening, Zeleny’s fellow CNN White House correspondent Jim Acosta argued: “There is no other way to describe what the White House is doing these days, Wolf, top officials including the President are hiding from the press.”

Zeleny and Acosta might not like the questions Trump is being asked by their colleagues, but that doesn’t give them the right to lie or misrepresent facts.