MSNBC Repeatedly Alleges Trump is Being Blackmailed by Russia

Throughout the day on Wednesday, journalists and pundits on MSNBC could only think of one explanation for why President Trump would call to congratulate Vladimir Putin on his re-election – Russia must be blackmailing Trump. Without any evidence, show after show engaged in wild speculation that the Russians “have something” on the President.

The hours of conspiracy theorizing began on Morning Joe, when co-host Willie Geist asked Barack Obama’s CIA Director, and newly-hired NBC News analyst, John Brennan: “Why won’t the President confront Vladimir Putin?...Do you believe he’s some how in debt to the president of Russia?”

Brennan eagerly jumped on idea: “I think he’s afraid of the president of Russia.” Geist wondered, “Why?” Absent any facts whatsoever, the former intelligence chief casually threw out a possible scenario: “Well, one can speculate as to why. That the Russians may have something on him personally that they could always roll out and make his life more difficult.”

He ominously added: “...but the fact that he has had this fawning attitude toward Mr. Putin, has not said anything negative about him, I think continues to say to me that he does have something to fear and something very serious to fear.”

Geist enthusiastically followed up: “So you believe Russia has something on him?” In part, Brennan argued that the Russians “have had long experience with Mr. Trump and may have things that they could expose and reveal.”

Seeming to forget that Brennan was not actually basing his comments on any evidence, Geist pressed: “Something personal, perhaps?” Brennan coyly replied: “Perhaps, perhaps.”

There’s obviously something that we all have been talking about for months that he – that Russians have on Donald Trump, whether it’s related to money or sex, I don't know, or both. But there’s something there. Because how could you be the President of the United States and congratulate a dictator on a rigged election? 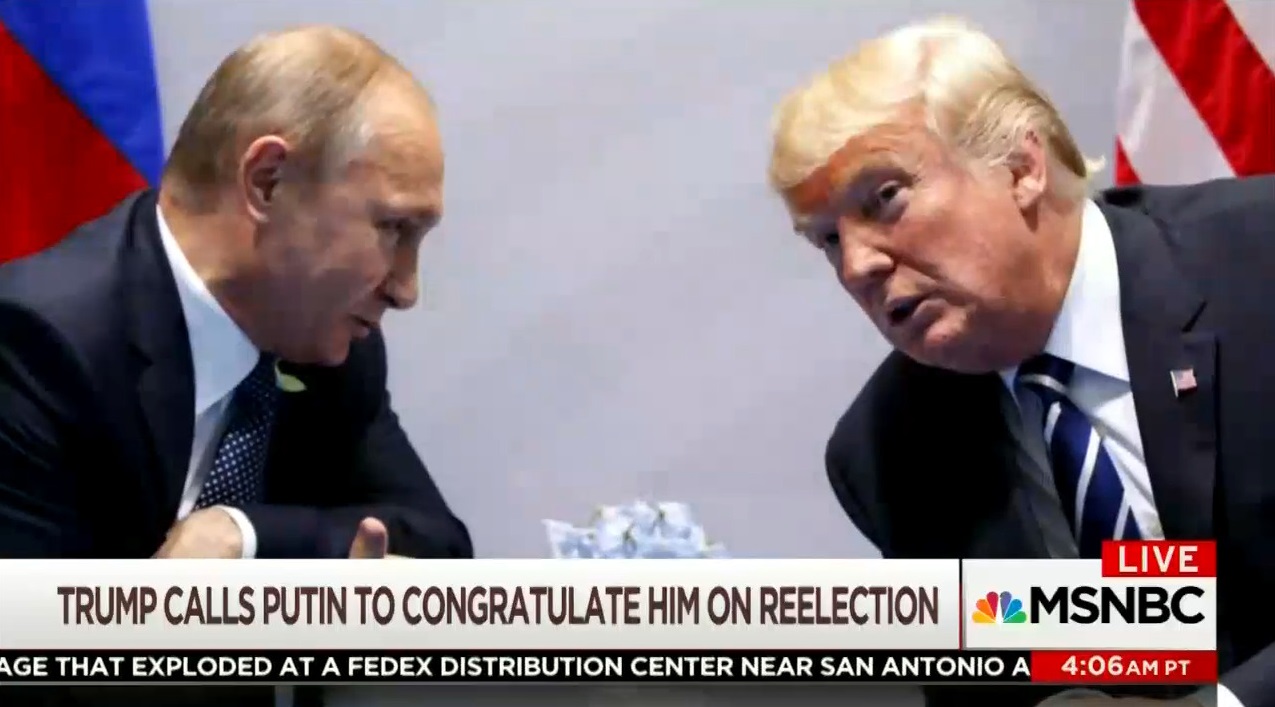 Interviewing Obama’s former Homeland Security Secretary Jeh Johnson during her 12:00 p.m. ET hour show, MSNBC anchor Andrea Mitchell worried: “Do you think there’s a more – there’s a nefarious reason? Is there something sinister going on or is this just Donald Trump having great confidence in his own personal diplomacy?”

Like Brennan, Johnson was happy to stoke the narrative: “Well, that’s a good question and I don’t think we fully understand the answer. And I think that’s one of the reasons why the Special Counsel’s investigation is so important.”

During MSNBC Live With Craig Melvin in the 1:00 p.m. ET hour, retired general and NBC military analyst Barry McCaffrey declared: “So it’s astonishing behavior by the President of the United States to make this phone call. What is going on?” That gave fill-in anchor Chris Jansing the perfect opportunity to ask: “So, do you agree with John Brennan that it looks like possibly this is about the Russians having something on President Trump?”

I don’t think it’s knowable. Something bizarre has happened when the President of the United States, who is commander-in-chief of the armed forces and our intelligence community, is not defending U.S. national interests. Why is he doing that?

“What is with the President’s interest in these dictators, broadly? And Vladimir Putin specifically, what is the blind spot there?,” substitute anchor Kasie Hunt posed to political analyst Eli Stokols in the 2:00 p.m. ET hour edition of MSNBC Live With Katy Tur. Stokols predictably gave the same answer that his colleagues had been giving all day:

Well, that’s the biggest question of all, and that’s a question I don’t think we know the answer to. That may be something that turns the key in the Russia probe, is figuring out why this president is so deferential to Putin and to Russia. And if there is some sort of kompromat that they have on him, if there is another reason why he may be susceptible to basically blackmail to the Russians. We don’t know the answers to that, but what we do see is that pattern from the graphic you just put up about the President’s respect, it seems like, for strongmen, and really, his disrespect for democracies and democratic institutions here in the United States and in Europe and across the world.

MSNBC seems to have adopted a new media motto: When in doubt, just make things up. On second thought, maybe it’s not new.