After a clip played of protesters chanting “Let them in!,” Beauchemin continued: “The President's executive order prompting Prime Minister Trudeau to tweet, ‘To those fleeing persecution, terror & war, Canadians will welcome you regardless of your faith. Diversity is our strength.’ The premiere of Quebec echoing Trudeau's message.”

Later in the 7:30 half hour, following a news brief from co-host Matt Lauer on the mosque attack, substitute co-host Hoda Kotb declared: “And that shooting comes amid heightened tensions worldwide over President Trump's order to restrict travel from seven Muslim-majority nations.”

The attack came just one day after Canadian Prime Minister Justin Trudeau reacted to the immigration ban announced by President Trump. He wrote, “To those fleeing persecution, terror & war, Canadians will welcome you, regardless of your faith. Diversity is our strength.” Canada has admitted close to 40,000 refugees since Trudeau took office in late 2015, many of them from war-torn Syria. This morning, Canadian officials say they stand behind the country's Muslim population.

CBS This Morning did not make any link between the mosque attack and U.S. immigration policy.

Correction: This item originally incorrectly stated that "one of the suspects was Muslim." Early reports on the shooting erroneously identified a second man, Mohamed el Khadir, as a shooting suspect. Authorities later announced that Khadir was a witness to the attack, not a suspect. The suspected shooter has been identified as 27-year-old Alexandre Bissonnette, a student of Laval University. We apologize for the error.

Here is a full transcript of Beauchemin’s January 30 report on Today:

MATT LAUER: We're starting off with a busy week. Let's get right to that breaking news overnight. There’s been a deadly shooting at a Canadian mosque during evening prayers, it is being labeled a terrorist attack. Genevieve Beauchemin from CTV News is at the scene in Quebec City. Genevieve, good morning.

GENEVIEVE BEAUCHEMIN: Good morning, Matt. This morning, two suspects are in custody after gunfire erupted at the Islamic center here in Quebec City. It is an act that the Canadian prime minister is calling a terrorist attack. And it has left six dead, eight others injured.

Fear and confusion after gunfire interrupts evening prayers at the Quebec City Islamic Cultural Center. Paramedics rushing to the mosque, filled with more than 50 worshipers when the shots started ringing out. In a statement overnight, Canadian Prime Minister Justin Trudeau calling the shooting a “terrorist act on Muslims.” Adding, “it is heart-wrenching to see such senseless violence.” This morning, Quebec City police confirming two suspects were arrested shortly after the shooting. Investigators say the motive of the attack remains unknown. 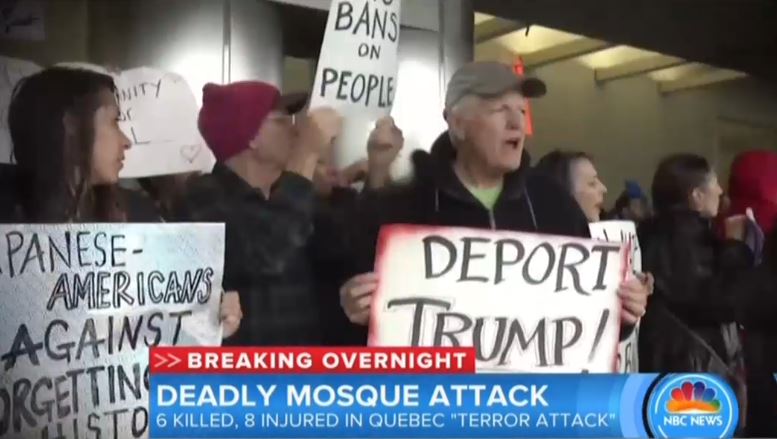 BEAUCHEMIN: The President's executive order prompting Prime Minister Trudeau to tweet, “To those fleeing persecution, terror & war, Canadians will welcome you regardless of your faith. Diversity is our strength.” The premiere of Quebec echoing Trudeau's message.

PHILLIPPE COUILLARD [THE PREMIER OF QUEBEC]: We should work together, strive to build together a society which will be even more open.

BEAUCHEMIN: The Quebec City mosque has become a target of hate before. Just last June, someone left a pig's head at the front door during the Muslim holy month of Ramadan. But this latest incident has authorities in the states beefing up security. Overnight, New York police stepping up patrols at mosques throughout the city.

We're told demonstrators will gather in front of the mosque tonight in support with the Muslim community here. Back to you, Matt.