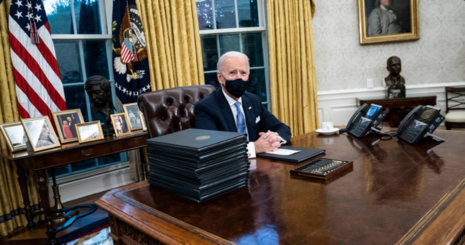 Despite having some of the lowest approval numbers in a modern day president’s first 100 days in office, the Washington Post wants you to believe President Biden is doing a fantastic job. In fact, the Post’s White House reporter Ashley Parker’s lengthy puff piece to Biden, Tuesday, completely ignored damaging polling for the president while playing up heavy praise from Democrats to somehow make the case Biden was “bipartisan" and a "transformational leader."

The reporter’s not-so-subtle short headline read, “In his first 100 days, Biden refashions himself as a transformational leader amid crises.” She praised Biden’s bait and switch with voters replacing promises of unity and moderation with executive orders and radical legislation:

As a Democratic primary candidate, Biden told debate viewers he understood that most Americans “are looking for results, not a revolution.” He promised wealthy donors that, in a Biden administration, “nothing would fundamentally change.” And he declared to rallygoers that he saw himself “as a bridge, not as anything else,” to a new generation of Democratic leaders.

Then the coronavirus changed everything.

By the time Biden ascended to the presidency, he had refashioned himself as a transformational leader — a president prepared to fundamentally overhaul the role of government in society on behalf of the nation’s working men and women.

Biden came to office citing four major crises — the coronavirus, the economy, racial inequity and climate change — and with those emergencies came an opportunity to go big and bold and ambitious and to push through massive legislation with or without the support of Republican lawmakers in Washington.

After comparing Biden to FDR, she hailed Biden's goal was to "set the course of the country for decades to come," complete with a picture of the president signing an executive order his first day in office. Parker proudly noted his version of bipartisanship didn't include Republicans:

He has sought to redefine bipartisanship, appealing less to Republicans in Congress and more to voters and elected officials nationwide. A successful bill in a Biden administration has a majority of support from across the country, even if it attracts no Republican votes.

And so far, Biden has largely assuaged the concerns of both the left and middle, appearing moderate in tone and temperament while pursuing many of the liberal policy prescriptions favored by his party’s base.

The reporter backed up her praise of Biden's "bipartisanship" with help from 10 of Biden's allies and aides, including Rahm Emanuel, David Axelrod and even former Post reporter-turned-Biden aide, Shailagh Murray. No anonymous sources were needed to trash the president, like the paper would rely on for their hit pieces on Donald Trump:

“The secret sauce is that his persona is reassuring and comforting to moderate and independent voters, and his polices are comforting and reassuring to progressive voters,” said Rahm Emanuel, the former mayor of Chicago who also served as President Barack Obama’s chief of staff. “And there’s an authenticity to Joe Biden that makes it hard to demonize him as a radical villain."

Well if Biden's 2020 campaign advisor says he’s just like the average American, then it must be true! Or at least that’s how Parker treats this eye-roll worthy comment. A real reporter would mention the recent polling mentioned above, that actually found Americans find Biden too liberal for their liking. And unlike Post reporters, more Americans don’t like that he’s expanding the government. NewsBuster’s Kyle Drennen noted in his writeup of the poll that:

"53% of Americans were “concerned that Biden will do too much to increase the size and role of government.” In addition, the poll found: “Relatedly, 40 percent see him as ‘too liberal,’ more than said so about either of his most recent Democratic predecessors at 100 days – Barack Obama, 33 percent, and Bill Clinton, 26 percent.”

But like the rest of the media, the Washington Post really isn't interested in being tough on Biden. Their White House reporter should probably be collecting a paycheck from the White House for this propaganda piece puffing up Biden as the new FDR just one day before his joint-address to Congress.