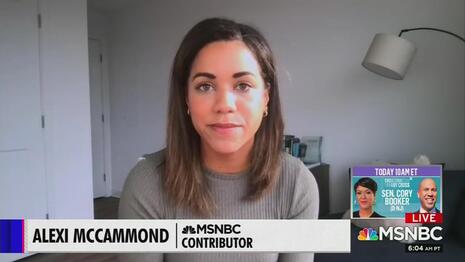 There’s an old saying that the media’ are in bed with Democrats, but sometimes that’s quite literally the case. Twitter was ablaze today after People magazine published a “heartwarming” story last night of love found between a reporter covering the Biden campaign….and President Biden's deputy communications director.

Alexi McCammond not only covered the Biden presidential campaign beat for Axios, but also regularly appears on NBC or MSNBC as a political contributor.

She told her story to People, about meeting and falling in love with TJ Ducklo, who was Biden’s press secretary for the 2020 campaign, turned Deputy White House Press Secretary. She conveniently revealed how they each told their employers this past fall (so election season), and McCammond asked to be reassigned:

In November, they say, they started dating.

"We both realized we both felt the same way," Ducklo, who joined the Biden White House as a deputy press secretary, tells PEOPLE. "We're both really happy, and we wanted to do it the right way."

That meant telling their bosses. An Axios spokeswoman says McCammond, who joined the site in 2017, told her editors about the relationship in November "and asked to be taken off of the Biden beat." She was reassigned to covering progressive lawmakers in Congress and progressives across the U.S. as well as Vice President Kamala Harris, the spokeswoman says.

"We stand behind her and her coverage," the spokeswoman says of McCammond, describing her as "a valued member of the Axios team."

For her part, McCammond says, "When my personal life had the potential to interfere with my work, I didn't think twice about sharing my happiness in November with Axios that I'd found someone in TJ who shows up for me in a way I'd only hoped for."

Sounding more like a PR piece for the reporter and her Team Biden boyfriend, People and McCammond bristled at the idea that their intertwined professions and relationship would raise eyebrows, even labeling such ethical concerns as "misogyny":

And, as a group, female reporters have long faced the misogynistic accusation they become inappropriately involved with male sources.

"These past few years have shown how easy it is for some to make quick and misguided judgments of those in the public eye. As a young Black woman in this industry, I've felt this firsthand several times," McCammond says. "TJ and I knew full well the unfair criticism our relationship might face, but knew that we weren't going to let bullies get in the way of our own happiness."

According to Politico, this People puff piece came out after Politico warned they would reveal their relationship:

POLITICO first contacted the White House in late January with questions about Ducklo and McCammond. On Monday evening, Playbook informed Biden’s comms staff that this item would be published today. Hours later, a glowing profile of McCammond and Ducklo’s relationship was published by People.

Axios only allegedly removed McCammond from covering Joe Biden very recently, even though she disclosed her relationship with the Biden aide, this past November. Politico also pointed out how on Biden's inauguration day, she was fawning over his presidency in her reporter capacity in an Axios podcast.

Even WH aides told People their relationship was the "worst-kept secret in Washington." But the top political aide denied ever being a source for his reporter girlfriend:

McCammond's work on Capitol Hill and Harris hasn't really pulled her so far away from Biden's orbit. Still, she and Ducklo say their professional and personal lives don't mix; and their relationship wasn't exactly hidden. "It was the worst-kept secret in Washington," says another White House aide, who like others here was quick to positively comment on the coupling.

Ducklo and McCammond also don't live together (though Ducklo has been dog-sitting McCammond's mini-schnauzer, Marlin).

"We keep it totally separate. I don't know what she's working on and she doesn't know what I'm working on," Ducklo says. "It means a lot of calls in hallways, in bathrooms and while one of us is walking her dog." (Has he been a source for her while they date? "Absolutely not," he insists. She says, "TJ has not been a source for any story I've worked on or in any capacity since we began dating.")

On a side note, does anyone remember how the media salivated over the Biden’s team claim they supposedly had an all-female communications staff?