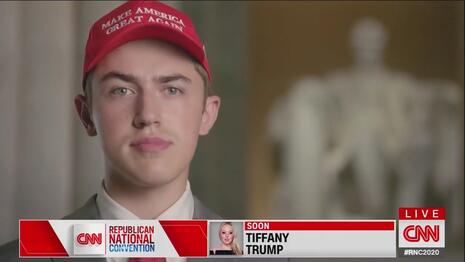 Looks like the sore losers at CNN are looking for reasons to get sued again. After former Covington Catholic student Nick Sandmann roasted the media last night at the Republican Convention, CNN analyst Joe Lockhart couldn’t help himself and had to send out a bitter tweet attacking Sandmann.

As Sandmann was speaking Tuesday night the political analyst and former Clinton press secretary tweeted out his grouchy opinion that no one asked for:

“I’m watching tonight because it’s important. But I don’t have to watch this snot nose entitled kid from Kentucky.’

I'm watching tonight because it's important. But i don't have to watch this snot nose entitled kid from Kentucky.

Did Lockhart forget that his network recently had to pay up after being sued by Sandmann for their defamatory coverage of him?

Conservatives on Twitter wasted no time dunking on the bitter CNN analyst:

Yeah, I guess he is entitled....to the money your clown network has to pay out for defaming him. https://t.co/DCpVc8j6dC

idk, Joe, if CNN’s holding out on giving you a raise, have you tried smirking in front of an elderly Native American man?

Because CNN had to pay him more than they pay Joe.

keep talking and you’ll probably end up paying for his college. https://t.co/iiicTH6wgH

CNN’s slobbering mouthpiece and bloated Clinton crony, Joe Lockhart, is a hemorrhoid on the body politic.https://t.co/csVSl12hIu

It’s rare to watch someone fall into an obvious trap in real time, but it happens: https://t.co/bFpqKkjBF5

The next morning, Lockhart tried to shame the right for laughing at him:

Taking a lot of personal attacks for saying i had no interest in hearing from the young Sandmann last night. Many of them are unprintable. It is uncanny though how many of them have the word Christian or Jesus in their profile.

For simply wearing a MAGA hat while a left-wing activist beat a drum in his face, Sandmann was smeared as a racist by CNN and many other media outlets in January of 2019.

As Sandmann said, “My life changed forever in that one moment. The full war machine of the mainstream media revved up into attack mode. They did so without ever researching the full video of the incident; without ever investigating Mr. Philips’ motives; or without ever asking me for my side of the story.”

Lockhart wasn’t the only CNNer complaining about Sandmann’s speech. CNN opinion writer Jeff Yang also tweeted out a whiny thread condemning Sandmann for not extending an olive branch to the professional protester Nathan Phillips who helped the media smear him.

Just a month ago, CNN host Brian Stelter got in trouble for sending out a gossipy retweet about the amount settled between his network and Sandmann.