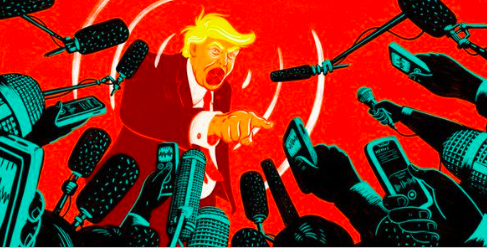 If there weren’t already enough journalists writing pity pieces for the media in the Trump era, what’s one more? Tuesday, Esquire’s politics editor Jack Holmes took the time to air grievances of openly anti-Trump reporters in his new piece for the men’s magazine entitled, “ChopperTalk: Where the White House Press Corps Goes to Get Ritually Abused by Donald Trump.”

The navel-gazing piece starts off portraying these brave reporters facing the sometimes harsh weather conditions of Washington D.C. as part of the sacrifice they make to preserve the truth, in these trying times. Holmes relayed this story from Playboy's Brian Karem:

There was a layer of snow on the ground, the air was bitterly cold, and when the chopper arrived, it sent all of that blasting towards the crowd of reporters. It was chaos as everyone tried to shelter themselves from the storm, and that was before the president disembarked and walked right by the scrum, headed straight to the West Wing. At that point, all hell broke loose. People made a run for it trying to catch the president before he got inside. Some people fell. Karem claims to have “pole-vaulted” over one of the bodies strewn about and, in a gruesome victory, was the only reporter to get close enough to Trump to ask him a question before he got inside.

The prevailing sentiment from White House journalists is that it is horrible. It’s bad in the winter, like in Karem’s horror story, but some told me it’s worse in the summer heat. You’re packed into a rugby scrum, waiting and sweating, the D.C. swamp heat beginning to set into your every pore.

You would think the press corps were on the front line, facing enemy fire, the way Holmes describes their jobs.

He goes on to play psychologist, talking about Trump’s great ego being served by these pitiful displays by the press:

"Reporters are also competitive beasts by nature, and there are plenty of shenanigans around securing a prime spot to get yelled at by the world’s most powerful man," he wrote, before falsely claiming the press had more freedoms under Obama:

Reporters in the Obama White House could more easily ask follow-up questions and push back on the president. Obama would also occasionally stop by the Briefing Room. Most importantly, though, press obfuscation was not part of the larger pattern of that presidency, whereas Trump has engaged in a ritual abuse of the press...

Holmes’ narrative flies in the face of what even the most liberal journalists have repeatedly acknowledged: that President Trump has offered much more access than previous, more favorably covered, administrations.

All in all, Holmes' “poor me” routine falls flat, when news networks are caught faking news reports, and covering up stories they don’t like, just to further an agenda. Polls consistently show how little faith Americans have left in the media, so this Esquire piece is just preaching to the media choir.