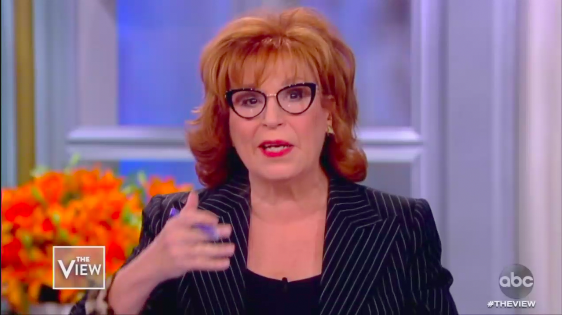 The View hosts were riled up Friday, after their show had been preempted most of the week by the televised impeachment hearings. Co-hosts Sunny Hostin and Joy Behar were devastated by the news that more independents were against impeachment, and the President’s approval ratings had shot up since the hearings began. The pair lectured Americans for not believing the Democrats, and media’s impeachment arguments.

Behar began by whining that she was “nauseous” at the news that the impeachment hearings weren’t going as planned:

Why is it that support for impeachment is going down for Americans, and Trump's approval ratings -- I can't even say it, it makes me nauseous, are going up? What is that they like about him? Is it the fact there are still 4,000 kids still at the border in custody or that he trashes veterans or that he makes deals with Russians, that he handed them the Middle East over to Russia? What is it that like about him? Tell me.

Prefacing that she thought the Ukraine phone call was unethical, Abby Huntsman told her co-host that “Democrats have played their cards completely wrong here.”

She pointed out that the hosts have been talking about impeachment “since he came into office.” While she was saying this, Behar, Ana Navarro and Sunny Hostin looked on, completely miffed. Huntsman suggested Americans didn’t take the Democrats’ impeachment push, seriously:

“I talk to people all the time and say, let me know 'when it's serious enough, and until it's going to happen. Until then, I'm tuned out and not paying attention,’” she added.

Behar and Hostin looked like they were about to snap at hearing that Americans weren’t as gung-ho for impeachment as they were. Behar made a flippant suggestion that maybe witnesses should wear puffy shirts like Sean Spicer on Dancing With the Stars, to get Americans’ attention. “That’ll keep people riveted,” she rolled her eyes.

I guess if it’s not important enough to Americans that you have a president who bribes another country for his own personal political interests and believes he is above the law, then I guess nothing is important enough because if you don't stop him now, where will he go from there? [ Applause ]

Meghan McCain noted the sharp shift among independents to being now against impeachment, before touting retiring moderate Republican Congressman Will Hurd’s remarks Thursday, that Democrats have not made their case for an impeachable offense. Sunny Hostin tore into him as “complicit” in “enabling the President.”

“They have really brainwashed you. They have brainwashed Americans into thinking he didn’t commit a crime!” she ranted.

From there, the conversation descended into chaos, as Huntsman asked why Democrats couldn’t just vote Trump out in 2020.

“Because impeachment is provided for in the Constitution!” Hostin declared as they cut to commercial.