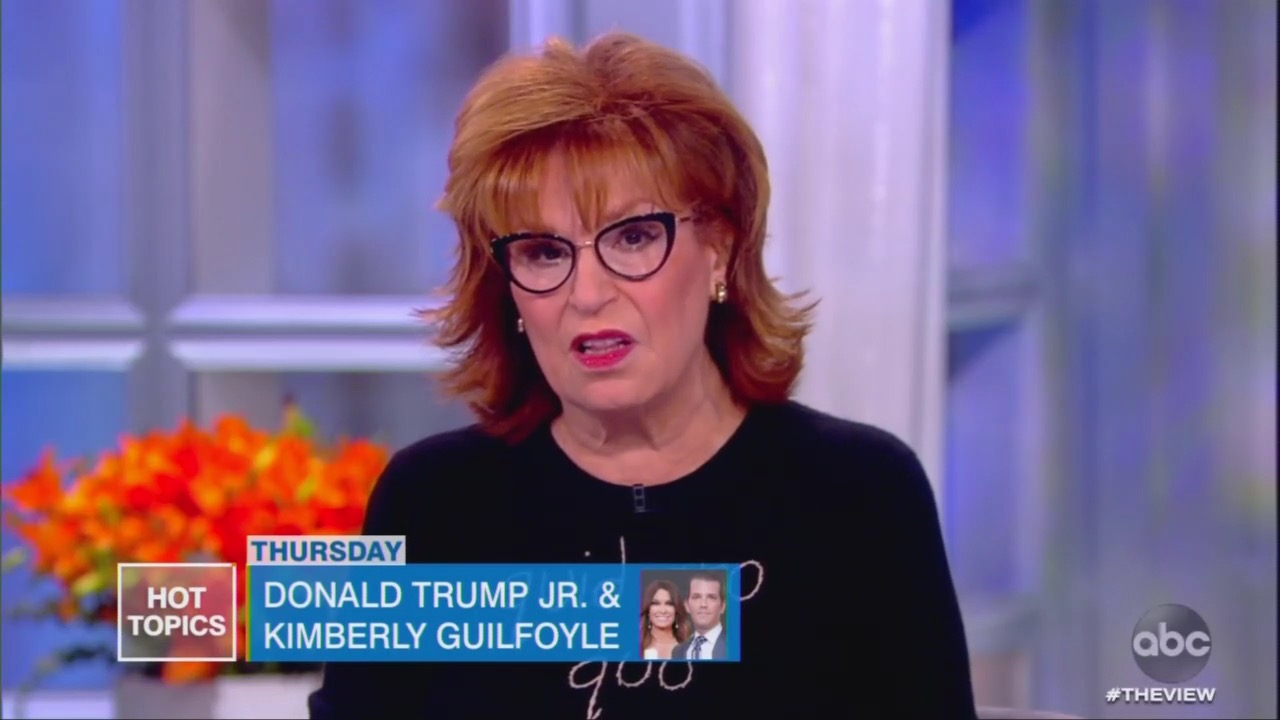 Just when you think things can’t get any more ridiculous on The View, the hosts spend time whining the President’s son’s Halloween costume is insensitive to animals. On Friday’s show, they also complained about a 2020 Trump campaign ad, which Joy Behar declared was full of paid actors “just like the ones who go to his rallies.”

They started the show recapping Halloween. After the co-hosts praised Behar’s “quid pro quo” t-shirt she was wearing, they put up an image of Donald Trump Jr., with his girlfriend, former FNC host Kimberly Guilfoyle, dressed up as a hunter and a witch, respectively ie: “witch hunt.” Behar and Hostin suddenly pretended they were animal rights activists:

“He’s a real hunter He likes to kill animals,” Sunny Hostin declared. Behar sneered, “Why would you brag about something like that?”

This comes just one week after they defended Whoopi Goldberg for being targeted by PETA for admitting she likes bacon.

Hostin repeated again,”He kills animals,” in case we didn’t hear her the first time. Friday co-host Ana Navarro however, thought he should be wearing a prison suit:

“Maybe he should have worn a prison suit. Orange is the new black,” she cracked as the audience and hosts chuckled.

That was when Behar announced that Don Jr. and Guilfoyle would be coming on The View next week which made their audience gasp and boo at the news. Their liberal fans on Twitter reacted as if they were bringing Satan himself onto stage.

Afterwards, all of the hosts, saved for Miami resident Ana Navarro, cheered President Trump’s decision to move his home residence to Florida. Behar actually thought this would hurt President Trump, because New Yorkers didn’t like Trump so that meant Floridians wouldn’t either when he moved there, because #logic:

“When he lived in New York, New York did not vote for him. Now they're going to get to know him a lot in Florida, they will not vote for him there either!” she gushed. The hosts went on to trash a 2020 Trump campaign ad against impeachment.

"There was not one black woman in that ad!" Hostin gushed, repeating "They couldn’t pay a black actress, enough money to be in it!"

She ended the segment hysterically ranting that if Trump is not impeached all Hell will break loose:

If he gets away with this, who's to say he can't get away with anything? He'll go into your taxes if you disagree with him. The next president can break all the laws. Americans need to understand what's at stake here. It's not just your pocketbook and, you know, they get whatever he said they're getting, tax breaks. It's the constitution. It's the environment!