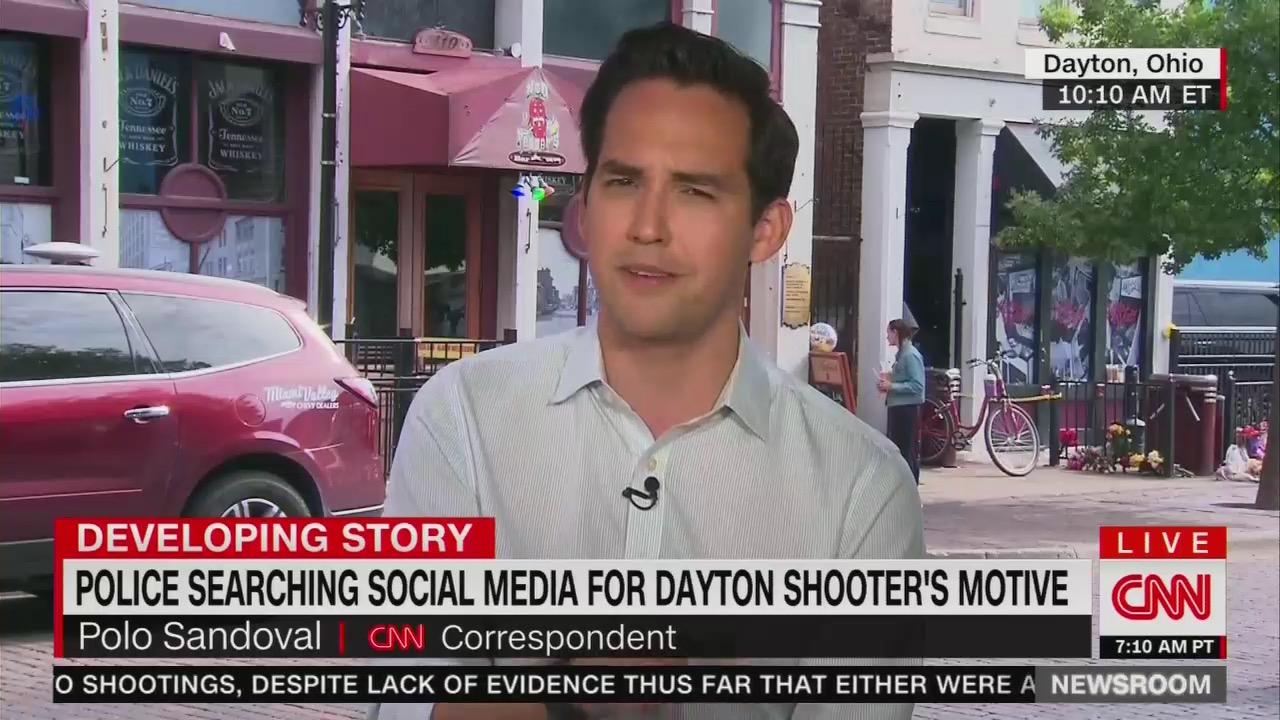 After CNN  finally published a report on the Dayton shooter’s leftist politics late Monday night online, the network’s left-wing anchors and reporters were eager to dismantle it almost as soon as it went up. On Twitter, CNN host Brian Stelter and reporter Oliver Darcy argued that the two shootings couldn’t be compared and denied that the Dayton shooting was politically motivated. On Tuesday morning, CNN anchors continued the spin, on-air.

On CNN Newsroom, reporter Polo Sandoval told co-host Jim Sciutto about the Dayton shooter’s alleged Twitter profile. However, Sandoval only spent two sentences discussing his politics. The rest of the report he spent downplaying those politics and insisting they had nothing to do with the shooting, unlike El Paso:

We now know obviously of a Twitter account that was suspended by that social media platform on Sunday. This would have been obviously after the shooting here and that particular account does contain both anti-police as well as extreme left-wing tweets.

However, we should point out that police have not acknowledged that at this point. They have said that they're considering everything right now as part of this investigation. But we also are hearing from multiple former high school students that went to school with the gunman and they say that this killer kept both a kill list and a rape list. However police there are also saying that at this point investigators are really reluctant to assume that anything from at least ten years ago would have played a role potentially in this investigation here or at least played a role as a possible motive here. And then back to the Twitter account it's really important to point out as well that police here on the ground have not specifically said that they are considering this -- or at least they haven't found anything that would point to this as being either racially or politically motivated, which would obviously be a very significant difference from what’s happening right now about 50 miles away, where you are in El Paso.

A little while later in the program, Sciutto was berating Trump 2020 campaign adviser Marc Lotter that Trump needed to be more forceful in his condemnation of white supremacy and acknowledge the “growing threat” of white nationalists. Lotter pointed out that Trump had condemned white supremacy during yesterday’s address, but it was unfair for the media to blame him for terrorism.

He brought up the media’s reluctance to acknowledge there may have been political motivation behind the Dayton shooting as well: “We're also not talking about the extreme leftist who was the shooter in the Dayton shooting, and so we've got to get to the point and what the president is talking about yesterday--” he began before being cut off by Sciutto.

But the fact is if you look at the crime, the DOJ’s statistics, the Anti-Defamation League's statistics, of the 50 accounts of domestic terrorism in the last couple of years, 39 of them driven by white nationalism. Those are the facts collected by the President's own Justice Department. Will you grant on this air that white nationalism is a growing threat in this country?

Actually, your show spend two sentences not “several minutes” on the shooter’s social media account. The rest of the minute and a half segment was spent downplaying your own report.