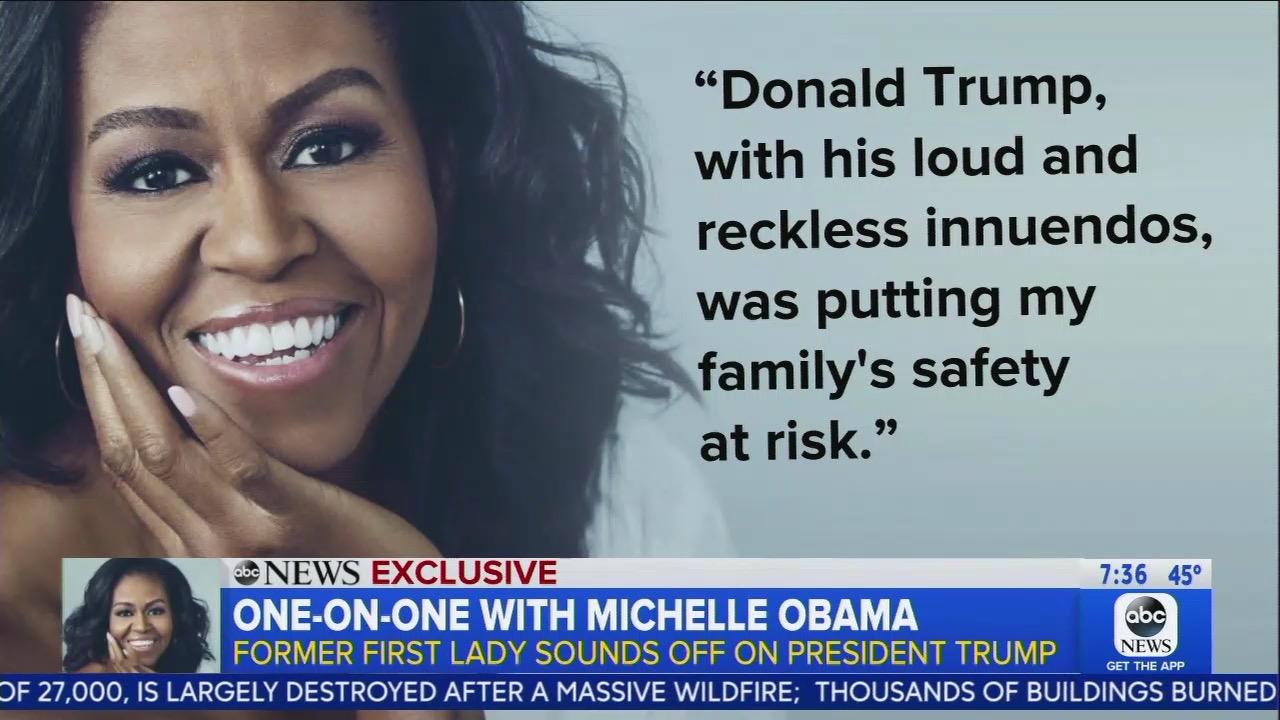 In anticipation for her new memoir to be released next week, the networks spent ample time Friday morning promoting Michelle Obama’s book, where the former First Lady blames Trump for the violence happening across the country and claims that his rhetoric endangered her family’s lives.

ABC spent the most time reporting on the book, thanks to an exclusive interview Robin Roberts did with Obama, set to air this Sunday night. Roberts, along with fellow anchors Michael Strahan and George Stephanopoulos fawned over the book and sympathized with Obama over her scathing critique of the president.

“She's been staying out of the political fray but in the book she has words for President Trump, I want to put up something on the screen right now and, of course, he was propagating the whole birther issue,” Stephanopoulos noted, before reading a quote from the book released to the press where she claims Trump would’ve inspired a shooter to target her family:

[A]nd she wrote, ‘What if someone with an unstable mind, loaded a gun and drove to Washington? What if that person went looking for our girls? Donald Trump with his loud and reckless innuendos, was putting my family's safety at risk and for this I'd never forgive him.’

“Wow,” Strahan commented. Roberts explained, “Because the rhetoric, because of the mistruths and lies that he was saying about the birther situation that was not true, she's a mamma bear.”

After a temporary distraction, Roberts came back to gush about Obama protecting her family against dangerous Donald Trump some more, adding that many women could relate to Obama since politics was just a part of her “life story:”

When then candidate Donald Trump was saying that it's something she cannot forgive so -- I want to be very clear and she is as well that politics is nothing more than a chapter in her life story. It is not her life story… Her story is relatable but it is not -- it is so much more than politics and I know that a lot of people will pick up the paper today and seeing the headlines and that, it's such a small portion of her story, some portion in the book, but, yes, what she said about the president and not being able to forgive him because she felt he was putting her family at risk.

CBS This Morning also touted the anti-Trump portion of the book, with Norah O’Donnell remarking, “Michelle Obama is opening up about a painful conspiracy theory during her husband's time in office. Ahead, how she says she'll never forgive Donald Trump for promoting that theory.”

Later on in the show, Gayle King highlighted even more of Obama’s swipes at Trump than ABC did, reading another portion of the book:

“[S]he calls [birtherism] ‘crazy and mean spirited, dangerous, and deliberately meant to stir up the wing nuts and cooks,’” King noted, adding that Obama also “reacted with fury” at the Access Hollywood tape and came to Hillary Clinton’s defense for Trump “stalking her” during one of the debates.

“Mrs. Obama claims the president's unspoken message appearing in darkened print is, quote, ‘I can hurt you and get away with it,’” O’Donnell read. Afterwards they gushed about how important it was for Obama to attack the president:

KING: She normally doesn't engage this way but clearly she has a lot to get off of her chest.

KING: Yes. Words have a lot of power.

O’DONNELL: They're not just rhetorical, they sometimes lead to action and that's the conversation worth discussing.

KING: A lot of people were waiting to hear from her.

O’DONNELL: She’s not holding back!

NBC’s Today show also played the same remarks, with correspondent Peter Alexander praising the book as “powerful and personal.” Anchor Savannah Guthrie chimed in to remark that, “ I remember the first time I interviewed her, she said I am strategic about when to speak out. Now she is out of the White House, she is writing a book and it sounds like she is going to say whatever is on her mind.”