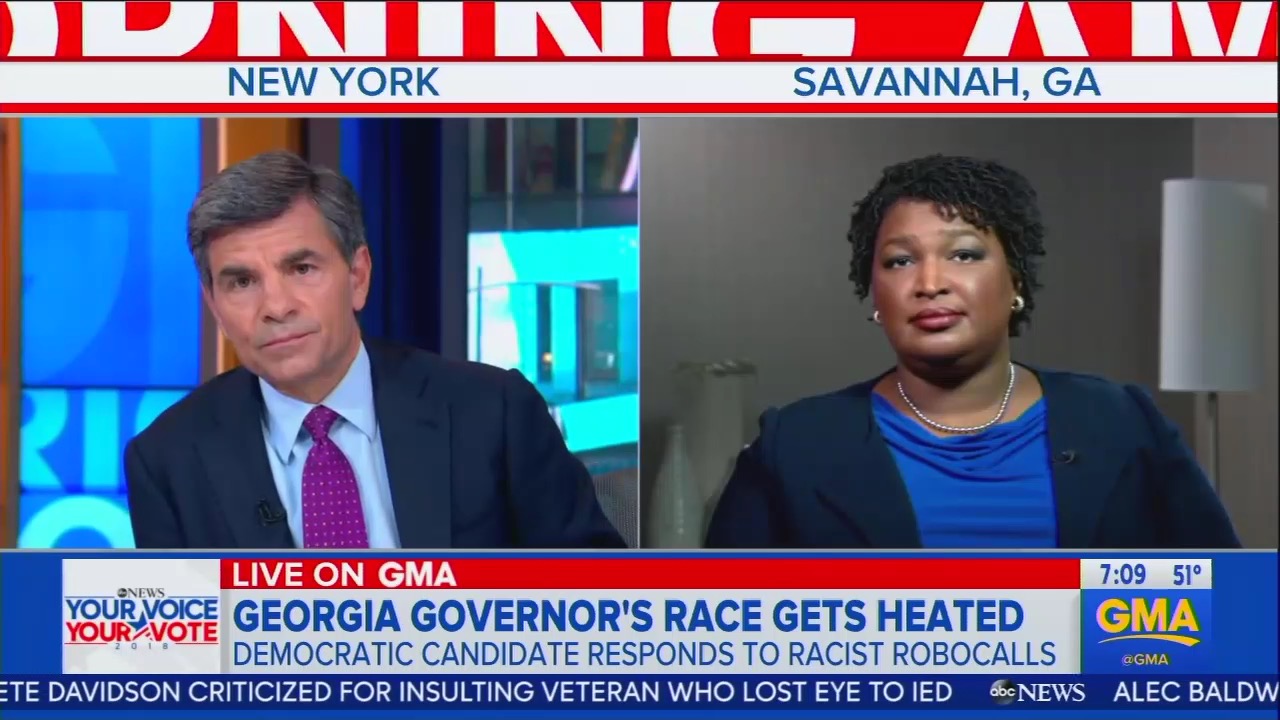 Just one day before the midterm elections, ABC’s morning show went all out in touting Democrat candidates for office, from the gubernatorial race in Georgia to the Senate race in Texas. Anchor George Stephanopoulos even touted charges of racism and voter suppression by Republicans in the Georgia race, while inviting the Democrat candidate, Stacey Abrams, on the show to bash her opponent in an aggressively partisan interview.

Before that interview, reporter Steve Osunsami delivered a report bashing her opponent, Republican Secretary of State Brian Kemp, for accusing Democrats of hacking into the voter registration website. Osunsami hyped there was “very little evidence” to support that claim while Democrats were calling it a “bold faced lie.” Funny how ABC didn’t seem to have the same moral outrage on behalf of Kemp, for the unsubstantiated claims of racism and voter suppression lobbed against him from Democrats.

After this, Stephanopoulos gave a sympathetic interview to Abrams, repeatedly inviting her to bash Kemp while joining in on the mudslinging with these loaded questions:

We saw the Georgia democratic party call that not only a lie this new investigation call from Secretary Kemp, but they are calling it an abuse of power. Do you think Secretary Kemp deliberately cooked up the charge to help his campaign?

That's a pretty serious charge, abuse of power right there. I want to ask you about the racist robo-call. It has been denounced by Secretary Kemp. Do you accept that repudiation?

Are you concerned these racist appeals are going to work?

The ABC anchor also asked her to “respond” to President Trump for calling her “extreme far left” and saying she would take away the Second Amendment. After that, Stephanopoulos asked his only critical question of Abrams, and it was a tepid one at that, saying, “On the Second Amendment, you have supported legislation for people to turn in their assault weapons.”

That was the only pushback Stephanopoulos gave in the entire interview which you can read below. He ended the interview gushing how she would be the first black woman for governor in U.S. history if she won, and asked her what “message that would send” to America.

STEPHANOPOULOS: We saw the Georgia democratic party call that not only a lie this new investigation call from Secretary Kemp, but they are calling it an abuse of power. Do you think Secretary Kemp deliberately cooked up the charge to help his campaign?

ABRAMS: I do. In fact, I think he cooked up the charge because he realizes once again he has left 6 million voters' information vulnerable, and this has happened twice before. This is another failure of his leadership and he recognizes if he got caught two days before the election having exposed so many Georgians, he would lose, and so he did what he does always, blame someone else for his mistakes.

STEPHANOPOULOS: That's a pretty serious charge, abuse of power right there. I want to ask you about the racist robo-call. It has been denounced by Secretary Kemp. Do you accept that repudiation?

ABRAMS: I think it's a little late for him to repudiate racist remarks given that he stood with someone wearing an anti-Islam t-shirt. He refused to denounce the same man earlier who accused black veterans of not being people who should not be able to support our country. I think unfortunately Secretary Kemp has not only abused his power, but he has failed to do his job. And you don’t deserve a promotion when do you not serve the people youve been hired to serve. Just this week, he was hit twice by federal lawsuits where the federal judges agreed with voters that he had failed to do his job allowing them to cast their ballots. You don't deserve a promotion when you fail to do your work.

STEPHANOPOULOS: Are you concerned these racist appeals are going to work?

ABRAMS: What I'm concerned about is that his overarching architecture of voter suppression, of ostracization, of demeaning and dehumanizing people that that can cause people to think their votes don't count. Which is why we’ve been so aggressive in telling people, the best antidote to his antics to his antics, is to actually turn out and engage. And we’ve seen unprecedented voter turnout. Because people understand that education and jobs and access to affordable health care are on the ballot this year and I'm the only candidate with a comprehensive plan for how we move our state forward together.

STEPHANOPOULOS: How about President Trump? In May he called you part of the extreme far left and said if you get elected, the second amendment is gone is you would turn Georgia into a sanctuary city for criminal aliens. Your response?

ABRAMS: My response is that he is completely wrong. Number one I believe in the second amendment. I know how to shoot a gun. But I believe in responsible gun ownership, and as we have seen in recent weeks and in fact the last few years, it is time for us to have common sense gun safety legislation. I support the fact that the federal government needs to take action on immigration, but in the state of Georgia, my responsibility will be to protect all people in our state, and most importantly, I want to expand medicaid because we have failed in the state of Georgia to do what's right by all people. Half a million Georgians stand to get access to health care, and we can save 20 rural hospitals in our state. These are important core values that all Georgians share. Education jobs access to health care there’s nothing radical about this except that we have Republican leaders who do not want to do that job.

STEPHANOPOULOS: On the second amendment, you have supported legislation for people to turn in their assault weapons.

ABRAMS: I have supported legislation that responded to massacres across our country and said that we have to take action on assault weapons. As I said yesterday and will always say, we want to introduce legislation to start the conversation, but the legislative process also leads to common results where people can work together on how we achieve our goals. I'm open to any conversation that will make our community safer, but I think we have to begin with the fundamental premise that assault weapons do not belong on our streets.

STEPHANOPOULOS: If you win, you will be the black governor in Georgia, America’s first African-American woman governor of Georgia. What kind of message will that send/

ABRAMS: I think it will send an incredibly strong message that the face of leadership is evolving in the United States. That doesn't mean anyone is being pushed out. It means that more are being added to the conversation, and I hope I'm just the first of many. More people who stand up and understand that our voices and our votes matter.