MSNBC's Ruhle: Trump Is Wrong, 'Loads' of Democrats Running Are Not 'Ultra-Progressive!' 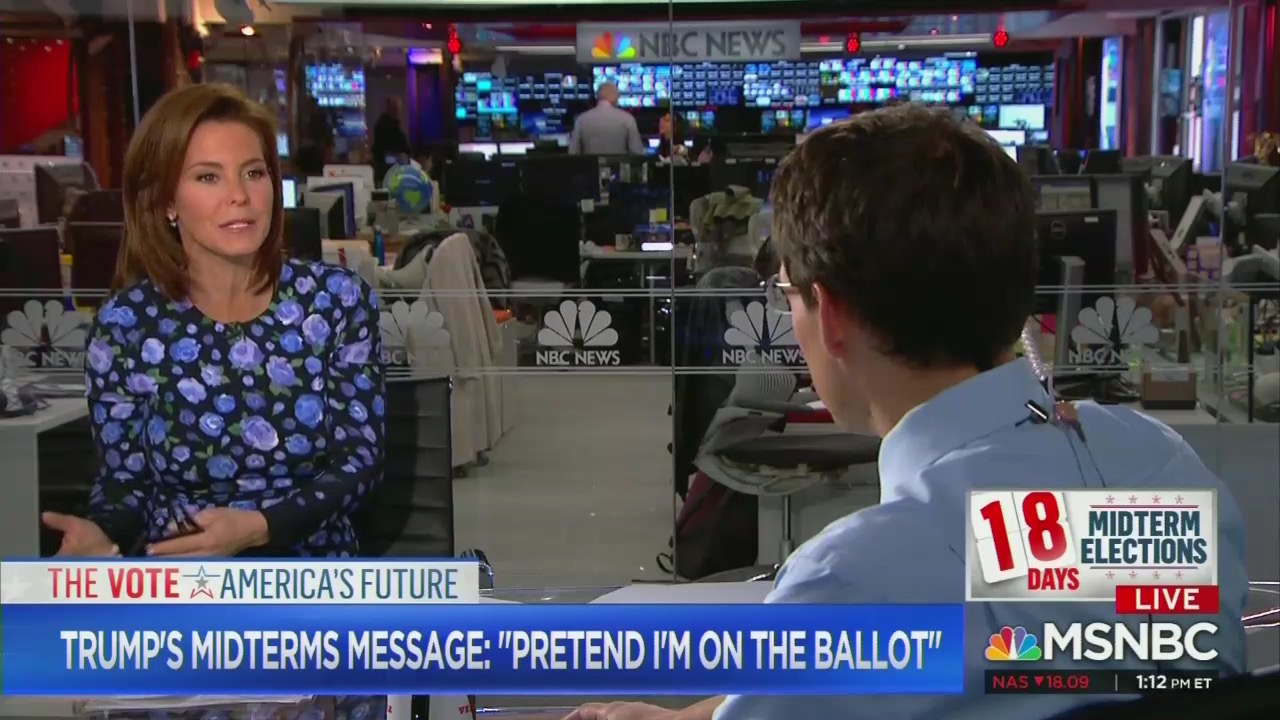 Friday afternoon on MSNBC Live, host Stephanie Ruhle talked with political correspondent Steve Kornacki about the media and Trump’s effect on the upcoming Midterm elections. In a rare moment of self-reflection, the MSNBC team noted that maybe the things they were outraged by weren’t the same things voters cared about.

Ruhle also used that to complain about how Trump was appealing to the fringe and that Democrats, meanwhile, had plenty of “centrist” candidates on the ballot.

The network first played the clip from Thursday night’s Trump rally in Montana where the President praised and made light of Republican congressman Greg Gianforte winning last year’s special election after he had “bodyslammed” a Guardian reporter. Ruhle admitted that Trump saying something offensive and then the media reacting with outrage at it has become routine by now, and wondered if most voters even “care” about what the media cares about:

Okay. We can put this on replay. He says something offensive. We play it. We're outraged by it. and the same people are outraged by it were outraged a year ago when the body slam happened and then Greg Gianforte was elected.

Is highlighting this yet again, Trump becomes white noise with his ‘I'm into it.’ I become white noise with ‘that's outrageous!’ and voters out there who just want to live their best lives, be physically safe, financially secure, socially free, do they actually care?

Kornacki agreed adding that these fights with the media were appealing to "a big portion of red America" or "the Trump side" that relished in seeing the "huffing and puffing of the media" in response to something he's said. "They like that Trump brings that out in the media,” he added.

Ruhle’s second guest Nick Johnston, Editor-in-Chief of Axios, added that the Trump factor was key in motivating both sides to vote:

That led Ruhle to complain that Trump was appealing to his base by making false characterizations of Democrats as “ultra-Progressive,” and “anti-Capitalist.” She tried to argue that Democrats were the moderate party, saying there was “loads of people running” who were “centrists,” but only could name one candidate:

[M]uch of the accusations that President Trump is making or the characterizations of the democratic tribe simply aren't true. He's painting all Democrats right now as these ultra Progressive, anti-capitalistic force which isn't the case. Right? You got guys like Bob Casey. There are loads of people running who are Democrat who are running on centrist platforms...

Kornacki tempered Ruhle’s enthusiasm by noting this was just how politics had become but when Trump pushed back against the media, he was seen as standing up for his base’s concerns about media bias against the right:

I think what Trump has tapped into, what we saw him tap into his  rise in 2016 and part of his resiliency with his base is this reaction he brings out from Democrats, from the media, from people, from groups and people who folks on the right have seen as a sort of their enemies and viewed in a certain way Trump as almost the bully who's fighting the people they feel bullied by.