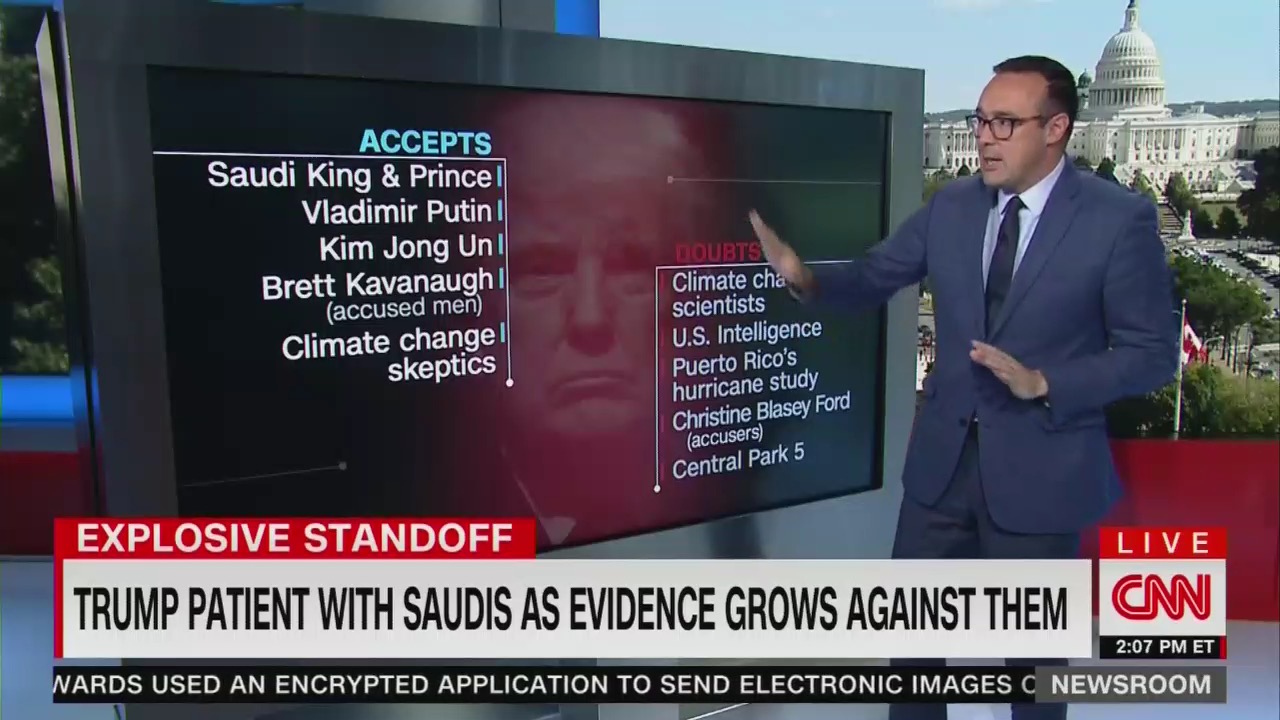 Cillizza bashed Trump for holding a “denial double standard” as he put it, on who he believes vs. disbelieves when charges are made. Using the presumed death of journalist Jamal Khashoggi at the hands of the Saudi government, Cillizza argued this was just another example of how Trump believed people who shouldn’t be believed and discounted credible people. Standing in front of a graphic, he even compared the evils of Saudi Arabia, Russia and North Korea to Brett Kavanaugh and climate change skeptics:

BALDWIN: So there's the theme there with all those guys and it's also noteworthy when you listen to whose word this president accepts versus totally dismisses.

CILLIZZA: There's a huge denial double standard. There just is. I've gone through a lot of these but look. Brett Kavanaugh, right? This is someone who says in this interview yesterday “Brett Kavanaugh was proven innocent." You can debate what you think about Brett Kavanaugh but him being on the Supreme Court is not proven innocent of the charges, the allegations by Christine Blasey Ford. It means the Senate decided he was good enough to be in the Senate and they--not discounted but they thought that didn't matter as much.

He then compared that to his list of people who Trump “doubted” which included “climate change scientists,” “Christine Blasey Ford,” “U.S. intelligence,” the “Central Park 5” and the “Puerto Rico hurricane study.”

“He does not believe and chooses not to believe denials of people who he believes are not for him, not on his side, not like him,” Cillizza stated. “It’s a massive double standard like many things with him,” he snarked.

Closing the segment, Cillizza reiterated how Kavanaugh, climate change skeptics and murderous regimes had another thing “in common:” their love for Donald Trump: