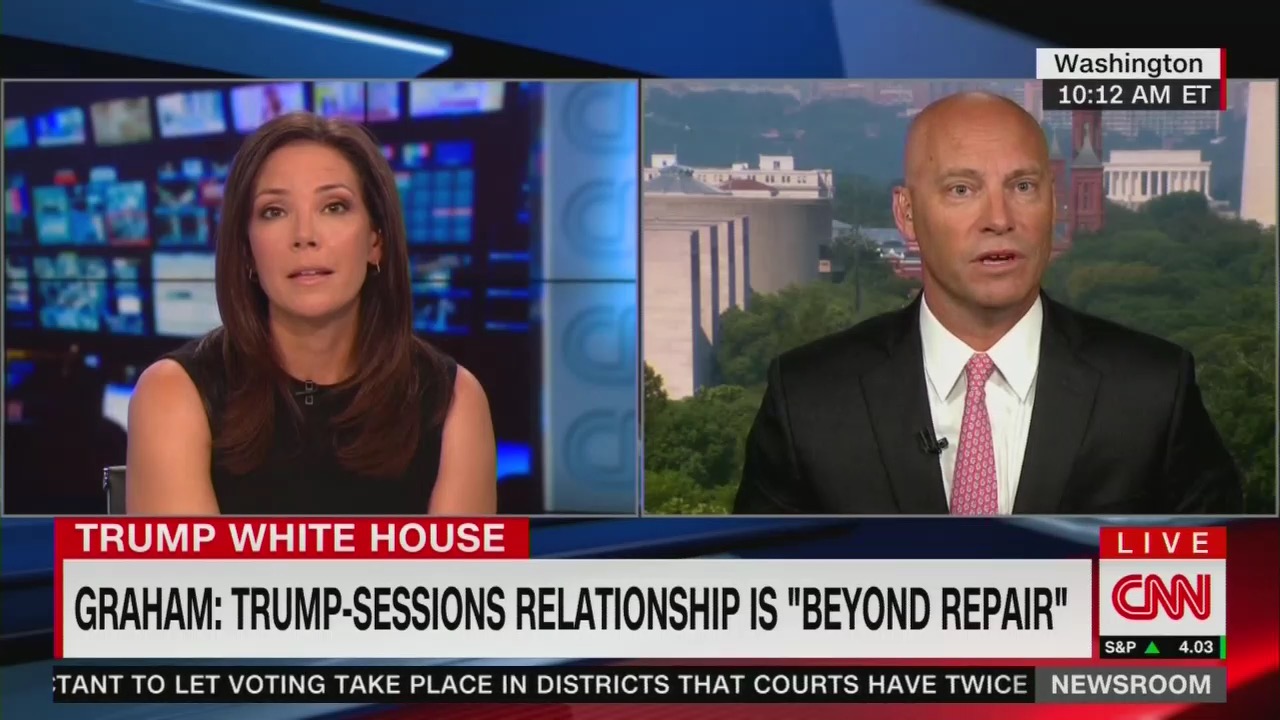 Former White House Legislative Director Marc Short appeared on CNN Newsroom August 28 to talk about what else? The Mueller investigation. Filling in for Poppy Harlow, host Erica Hill tried to get her conservative guest to shame the President for potentially replacing Attorney General Jeff Sessions, suggesting Trump only wanted “blind loyalty” in his administration. But Short schooled the CNN host on the nature of cabinet picks and just how biased this investigation had become.

Hill began by hyping Senator Lindsey Graham on the Today show this morning suggesting Trump being likely to replace Sessions after the midterms. Asking for a response, Short explained that the President always picks people whom he feels would be loyal to him and that was no different than past administrations. “The Department of Justice is filled with political appointees and to suggest that Eric Holder's Department of Justice was an independent one would be kind of laughable,” Short scoffed.

But Hill wasn’t ready to let it go, asking if Trump was just looking for “blind loyalty” in his cabinet with regards to the investigation. Short dismissed this notion, and reminded the CNN host of how wayward the investigation into “collusion” has become:

What was supposed to be an investigation about Russian interference in our election is now about prosecuting people for tax evasion and for challenges of not registering as a foreign lobbyist. Those are legitimate crimes that should be prosecuted. The question is, do you need independent and special counsels to do that?

The CNN host kept to her talking points, wondering if it would be a “dealbreaker” for Trump to appoint someone who would vow to protect Robert Mueller. Again, Short dismissed CNN’s spin, saying there have been plenty of opportunities for the White House to be less cooperative, and that they had turned over millions of documents to the Special Counsel already.

Hill then put the focus on Trump, asking Short why Trump doesn’t just let the investigation play out its course and stop criticizing it as a “rigged witch hunt.” At that ridiculous question, Short rehashed the facts.

“Erica, let's keep in mind a couple things.The investigation has been going on for two years now at tens of millions of dollars of expense, there’s been independent House investigations--” he began before being cut off.

“Far from the longest investigation by a special counsel!” Hill gushed. “I don’t have a graph in front of me. But we looked at that a number of times on this network. It's not like we are looking at 20 years here,” she scoffed.

Hill called out the host for the ridiculous standard the media was holding this investigation to. “Is that the measurement? Is it supposed to be whatever the longest investigation ever? Is that how we’re going to measure if its successful or not?” he asked.

Short again reminded her that independent House and Senate investigations have already concluded that there wasn’t any Russian collusion by the Trump campaign and that was supposed to be what the Special Counsel was looking into, so that was why he was frustrated with Sessions.

After seeing that she wasn't going to get the answers she wanted, Hill wrapped up the interview.