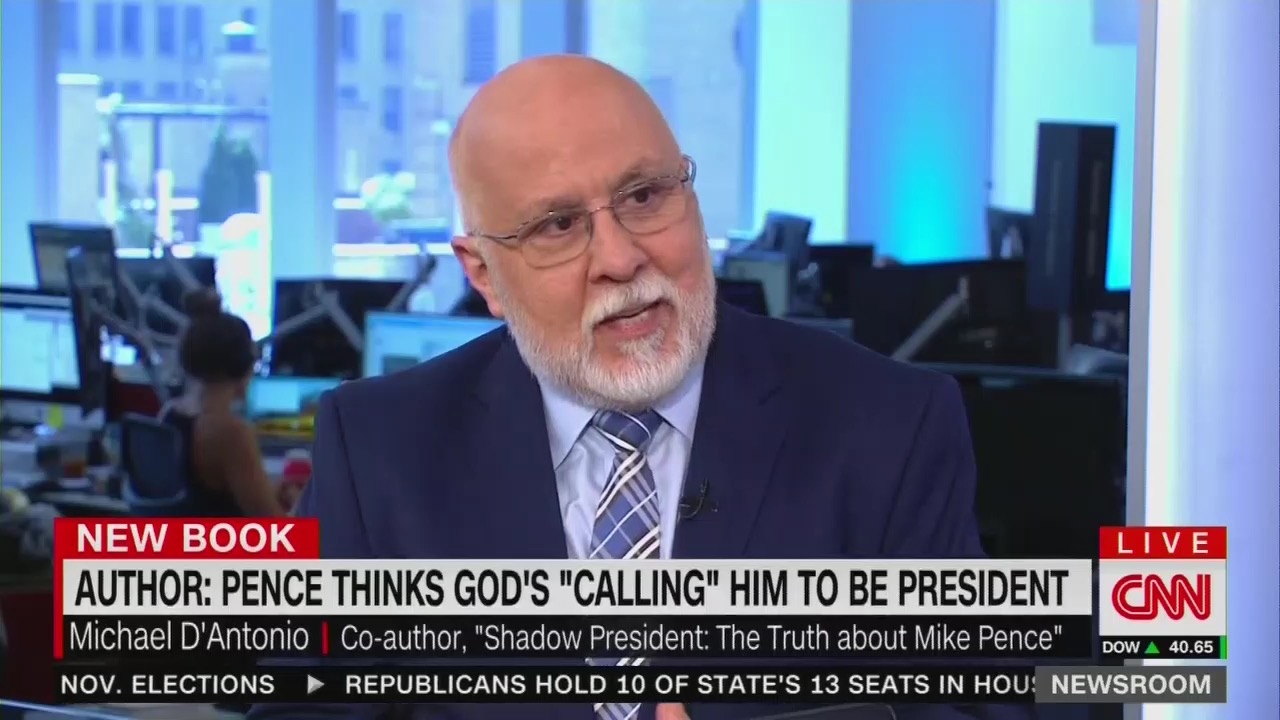 If impeaching Trump is the ultimate goal of the liberal media, fearmongering about a Mike Pence presidency must already be on their minds. That seemed to be the goal of CNN Tuesday when the network had on one of the authors of a new unflattering book about the Vice President on both New Day and CNN Newsroom August 28, to gush about how Pence was really a “Christian supremacist” that all Americans should be worried about.

Michael D’Antonio, who is also a CNN contributor, co-authored the book, Shadow President: The Truth About Mike Pence, and explained to New Day host John Berman that Pence had been gearing up to become President even before he joined the administration. The author characterized the Vice President as eager and ready to take over as president if something happened to Trump. “[E]veryday Mike Pence imagines he’s one day closer to the Oval Office,” he gushed.

After Berman noted that it wasn’t unusual for a politician to have ambitions of the presidency, he asked D’Antonio about the most salacious quote from the book, where he called Pence the first “Christian supremacist” who could become President.

Berman pressed, “Now he’s not the first committed Christians to be anywhere near the White House. I mean there have been a lot of deeply religious figures there.” But a defensive D’Antonio doubled down on his claim, saying that Pence put his religion above his politics and that was frightening:

“I think he's a very divisive figure. He would like to impose a religiously inspired politics on our country that means rolling back marriage equality, it means a ban on abortion, a whole host of policies that are religiously driven. He's very upfront about that,” he ranted. Berman surprisingly pushed back again, saying that religious beliefs and political views often intersect. D’Antonio then claimed that Pence believed those who didn’t share his Christian beliefs were going to Hell and that was a shocking thing to hear from a President.

While Berman was more skeptical of the book’s claims, Baldwin offered no pushback when D’Antonio appeared on her show a few hours later. Rehashing Pence’s alleged ambitions from youth to become President, He gossiped how Pence was ready and waiting in the “shadows” for Trump to “stumble” so he could take office. “I think Mike Pence imagines this is going to happen for him,” D’Antonio gushed.

Baldwin also asked about his claim that Pence was working to bring Trump to Christ. D’Antonio claimed Pence saw his role as serving a “pagan king” that he needed to “look after” to keep him on “the straight and narrow.” He then asserted that if Trump resigned this year, Pence could be President for a total of 10 years (if he ran and won twice), warning that should concern Americans because he is “anti-gay” and anti-abortion:

And the goal here is not to really pick on Mike Pence's belief system. But he made his particular kind of Christianity the centerpiece of his political personality and I think we have to talk about it. You know, he is very much anti-gay. He's anti-marriage equality. He wants to roll back Roe v. Wade. All of the things are religiously inspired. He has a right to those positions but we should all be aware of them.