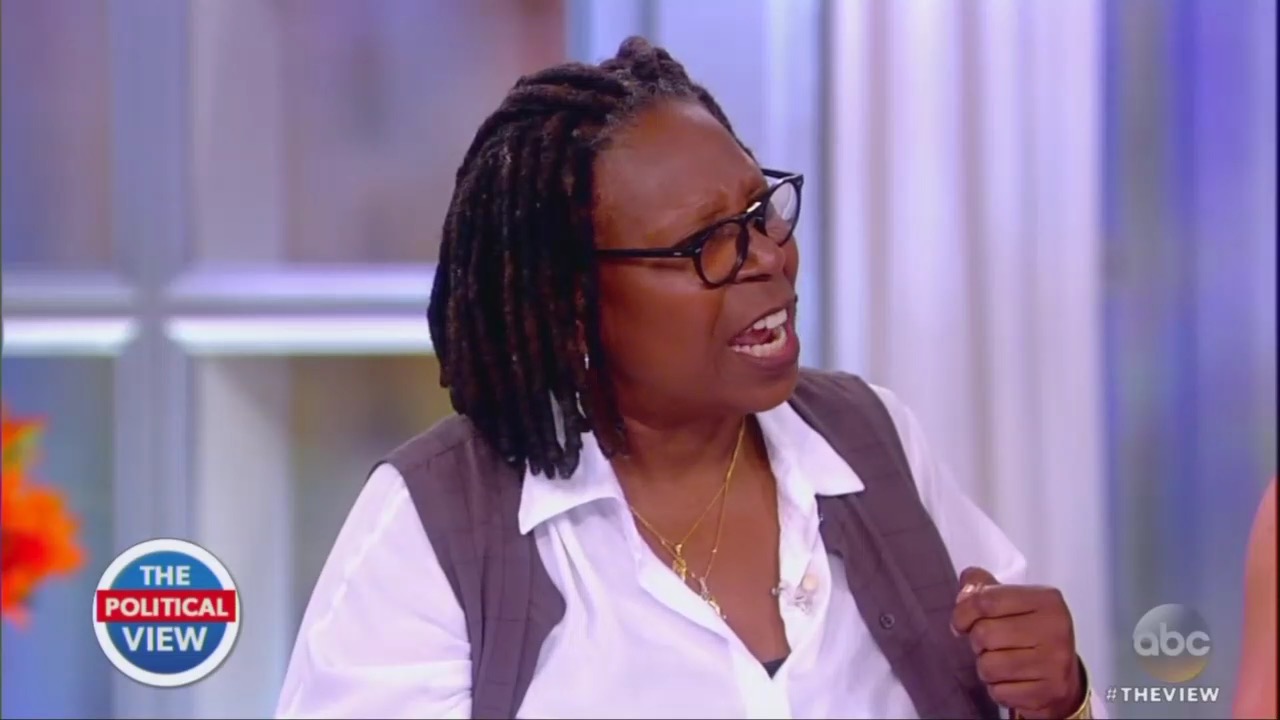 Thursday at the View, Fox News’ host Judge Jeanine Pirro appeared as the guest to talk about her new book about what she called, the “conspiracy” against Donald Trump. The largely liberal table of course butted heads with Pirro but remained civil and let her speak until they very end of the interview when Whoopi Goldberg lost her cool and shouted her down to end the segment.

The fallout happened after Pirro answered host Sara Haines question as to why she called her book, “Liars, Leakers and Liberals, The Case Against the Anti-Trump Conspiracy”. Saying she wasn’t “an ideologue,” she slammed the Mueller investigation as a “fake investigation based on a fake document” (the unsubstantiated Trump-Russia dossier.) That upset host Sunny Hostin who shot back, “It was not only based on that and you know that.” CNN commentator Ana Navarro, filling in for Joy Behar, used Pirro’s initial comment to try to pin her into a corner on President Trump:

You just said you're not an ideologue. Let me ask you a question. Do you think Donald Trump embraces and embodies conservative ideology? He used to have a different position on pro-choice. He is imposing tariffs. He's against globalism. Do you think he's an ideologue that is faithful to conservative policies?

After denying that she was there to talk about what type of conservative Trump was, Whoopi demanded, “You have to answer the question!” Pirro explained how better off the country was with Trump as president.

“You want to talk about Donald Trump? You tell me what metric in the country is worse off? Unemployment is lower than it's been for 50 years. Minorities. Hispanics. African Americans,” she started to list off as the table erupted. Whoopi shook her head and told her to “Stop, stop.”

“Hate crimes are what’s up!” Navarro quipped as Hostin tried to claim that Obama was the one responsible for the country’s current economy. Pirro rebutted that claim.

“The GDP under Obama was barely 1. We’re going up to 4,” she shot back. Meghan McCain urged the importance for the hosts to understand why Trump was still garnering high support among Republicans.

“I also think it's important as we said. 89% of the Republicans support him. He still has a huge popularity in the country. If Democrats don't get their you know what together, he'll certainly be re-elected,” she warned.

As Whoopi started to badger Pirro again she shot back that the host was clearly suffering from “Trump Derangement Syndrome.” Whoopi took offense and went on a heated rant against the Fox News host:

Listen, I don't have Trump derangement. Let me tell you what I have. I have a lot of -- I'm tired of people starting a conversation with Mexicans are liars and rapists. I'm tired of people starting a conversation about this country -- [ cheers and applause ] Listen, I'm 62 years old. There have been a lot of people in office that I didn't agree with. But I have never, ever seen anything like this. I have never seen anybody whip up such hate. I have never seen anybody be so dismissive. [ Cheers and applause ] And I -- and clearly you don't watch the show. So you don't know that I don't suffer from that. What I suffer from is the inability to figure out how to fix this. That's my issue. But one of the things that you talk about a lot, and I'm curious about it is the deep state. How long has the deep state been there and who is running it?

Pirro tried to address the opening of Whoopi’s rant before answering her final question but Whoopi wasn’t having it.

“Your opening statement, which was how horrible it is that Donald Trump is talk about all of these people,” she started to say as Whoopi kept cutting in.

“No, no I'm sorry baby, that's what you said! You said--” she gushed as the conversation turned into a meltdown.

Pirro gushed, “You not what's horrible? When people who shouldn't be here end up murdering the children of American citizens?”

Whoopi yelled back, “What is horrible is when the President of the United States whips up people to beat the hell out of people!”

After the break, Whoopi tried to defend her outburst, laughably claiming that she “rarely” loses her cool. We have an entire archive of blog posts on past shows demonstrating how false that assertion is.