Gingrich: Trump Has Been ‘Much Tougher’ Than Obama Ever Was on Russia 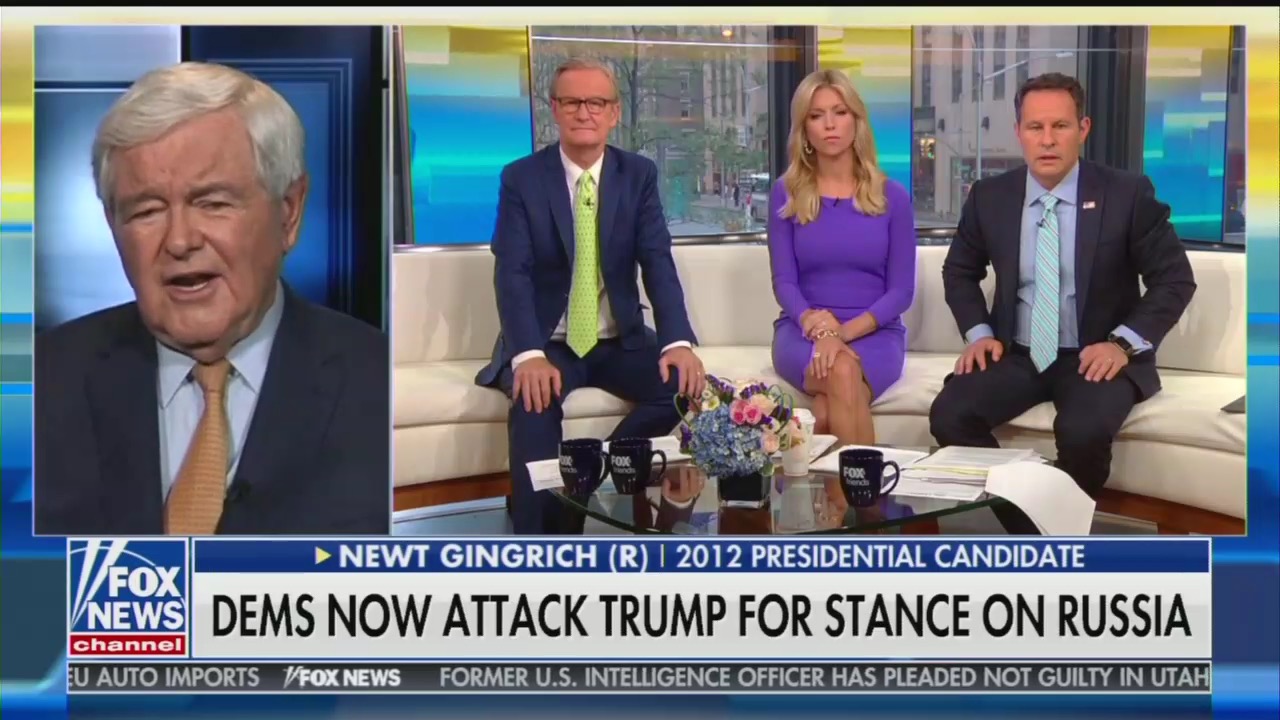 Former Speaker of the House Newt Gingrich appeared on Fox and Friends Wednesday morning to combat the media’s hypocritical outrage over President Trump’s rhetoric at the press conference with Putin in Helsinki, Monday. While acknowledging that Trump made the biggest mistake yet of his presidency, he commended the president for correcting his words yesterday. Gingrich further pointed out that the media and Democrats didn’t have any problem with President Obama’s soft stance on Russia, and that Trump has actually been much tougher on Putin through his administration’s actions.

After introducing Gingrich, host Steve Doocy explained how Trump set the record straight on his “misspoken” words at Monday’s press conference, and asked the guest what his thoughts were on the left’s outrage over the situation.

Gingrich called out the hypocrisy of Obama administration officials bashing Trump now, as they were the ones responsible for Russia being able to interfere into the 2016 election, to begin with:

Well, if you read the entire text of what he said in the Roosevelt room, he goes on at length reinforcing his belief in the American intelligence agencies and by the way pointing out that his critics are the people who failed. When you see John Brennan or you see other people who are -- Jim Clapper talking on television, those are the guys in charge in 2016. So their hysteria and strong language, they are the failures. Trump was a candidate. He wasn't in charge of national security. They were and they failed.

Coming back to Trump, Gingrich called the correction “important,” as Trump was “not a guy who likes to correct himself or likes to admit he made a mistake,” and he needed to “set the record straight,” Gingrich emphasized. But, he added, Trump's actual actions towards Russia have been much tougher than the past administration’s, he said, listing several things Trump has done that the media hasn't given him much credit for:

But, let's also look at the record. Obama was very weak in Ukraine. Trump has authorized the sale of weapons to the Ukrainians to defend themselves. Trump has expelled 60 Russian intelligence people from the United States. He has closed four Russian offices in the United States. He went to nato, to do what? To get them to increase their spending so they would be stronger in containing Russia. He lectured the Chancellor of Germany about what? About buying natural gas from Russia and propping up Putin. So, to suggest that somehow Trump is some patsy for Putin requires to you deny everything that he has done and that's why correcting that one mistake, I thought, was very important.

Host Brian Kilmeade referenced former CIA director Leon Panetta claiming that the Russians must have something incriminating on Trump. “Do you want to counter that or agree with that?” Kilmeade asked.

Gingrich blasted the former Obama administration official’s hypocrisy in how the past administration treated Russia. “All of a sudden have you this revisionist history from the left. The fact is that Obama was totally ineffective. Hillary Clinton's reset button was a joke,” he slammed, adding that there was “no question” that Trump has been “much tougher” on Putin than Obama was:

In Panetta's case, I would like to know why when he was advising Obama they didn't provide offensive weapons to Ukraine. Why they didn't do the things to increase spending at NATO. Why, you know, I just think all of a sudden have you this revisionist history from the left. The fact is that Obama was totally ineffective. Hillary Clinton's reset button was a joke. She gave the Russians access to uranium that they wouldn't have gotten otherwise. So when I look at the totality of the Obama period, it seems to me that Trump has been so much tougher than Obama was that there is no question.

And I don't know why Leon would say that Leon is a pretty balanced guy. I thought it was Brennan just because it sounded like Brennan who is pretty I couldn't know balanced.

Kilmeade spoke up saying that Obama added to the mess by not enforcing his “red line” in Syria:

I will add something to that. Russians would not be in the Middle East again if President Obama enforced his red line in Syria. That left an opening for the Russians to come back in, start taking the so-called weapons of mass destruction, that poison gas out. By the way they left almost all of it. In and next thing you know, they are flying their planes and their presence in Syria where it is today.

While Gingrich argued that Trump has shown a lot more toughness on Russia than Obama ever did:

I think it's fair to say compared -- in terms of who was softer on Putin, I think that Trump has fired about 125 missiles into Syria in order to enforce our disagreement with the use of chemical weapons. As I said a minute ago, he expelled in supporting Great Britain, he expelled 60 Russian officers who were in the United States. He closed four offices. I didn't see anything like that of Obama. So, but I'm not going to say that Obama, therefore, was a puppet of Putin. And frankly, I'm very surprised that somebody as rational as Leon Panetta would have said that.

Blasting the media, Gingrich poked fun at the left’s perpetual outrage over the president.