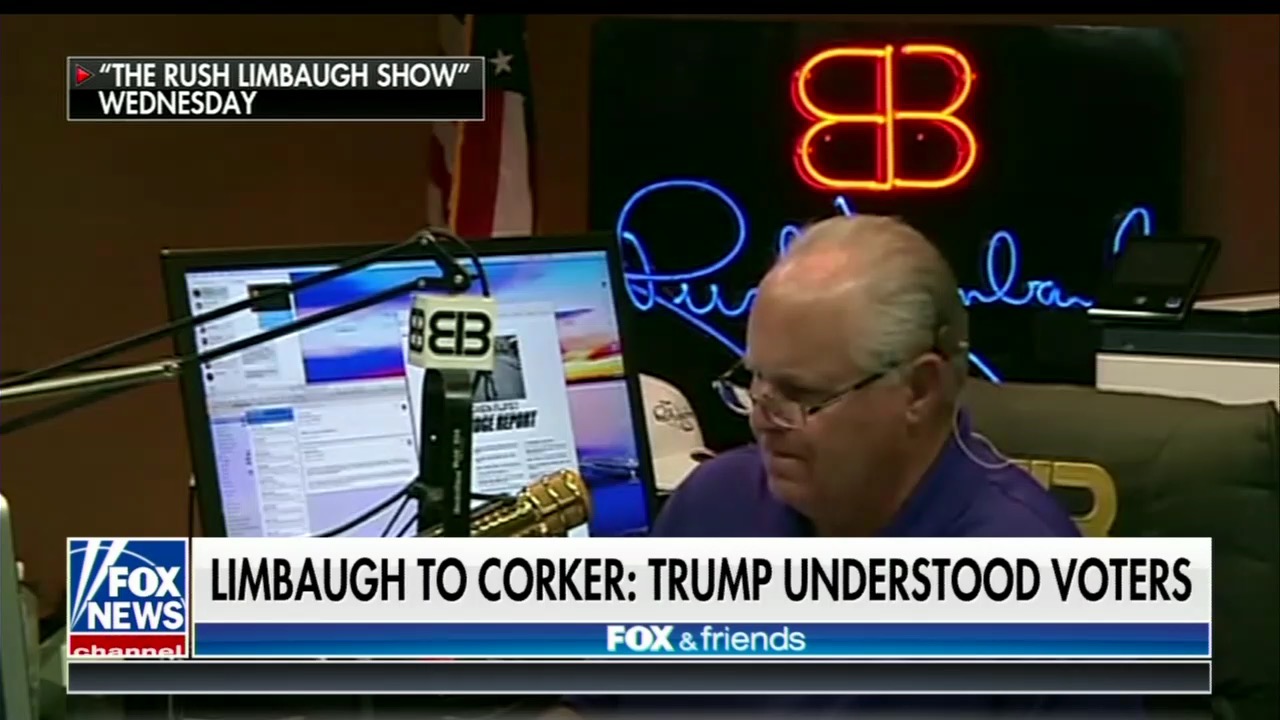 Conservative talk show host Rush Limbaugh blasted NeverTrump Republicans and the media that aids them on his radio program, Wednesday. Fox and Friends picked up the clip of Limbaugh taking down Tennessee Senator Bob Corker and the media that praised his words, after he smeared Republicans who supported Trump as part of a “cult.” Limbaugh called out several media outlets as elitists who lazily dismiss those they don’t agree with, wondering why they didn’t say the same thing about Democrats when Obama was in office.

Fox and Friends opened their June 14 show with the radio host’s commentary.

Host Ainsley Earhardt noted that Corker was leaving Congress in January. Like Jeff Flakes’ grandstanding display last year, Corker felt the need to take potshots at the president on his way out, telling the media that Republicans who supported Trump were part of his “cult.”

Fox then played a clip from Limbaugh’s June 13 show:

Brian Kilmeade went on to note that Democrats weren’t actively opposing President Obama when he was in office, a point that Limbaugh continued to pick up on his show the next day. Where was the media hyping the president’s supposed cult in the Democrat party, then?

“In fact, you would be more accurate to say that Obama’s supporters were a cult,” Limbaugh remarked on his show later that day, pointing out how often the president was praised by liberals and the media for superficial reasons. Limbaugh went on to blast CNN and the Washington Post for blaming state primary results in Virginia and South Carolina as evidence Republicans were part of Trump’s “cult,” saying their dismissive commentary was proof of how much the media hates conservatives and middle America:

The media is the one business where customers and their complaints are always wrong, and now this piece. So all it takes is Bob Corker talking about Trump voters as a “cult,” and here comes the Washington Post, “Republicans Embrace the ‘Cult’ of Trump, Ignoring Warning Signs,” and then labeling this Virginia candidate nominated for senate “Trump-like … a history of embracing Confederate symbols and white nationalism.” For God’s sake! How pathetically puerile could these people be? That kind of criticism doesn’t take any kind of brains at all.

Later on, Limbaugh called this shaming a “lazy” way to dismiss the fact that they were wrong about what Americans wanted, evidenced by the 2016 election results.

The idea that this is some kind of a cult is simply a lazy way of dismissing it, a lazy way of not having to explain why your side keeps losing, ’cause you don’t want to get down do the substance that might explain that. That would be painful. So you blame it on a cult, and you claim you don’t understand it. Yeah, so, create the picture that a bunch of Trumpists are waiting for the next Hale-Bopp Comet to come along and hope they get on board. But you’re gonna miss everything going on if that’s the case.