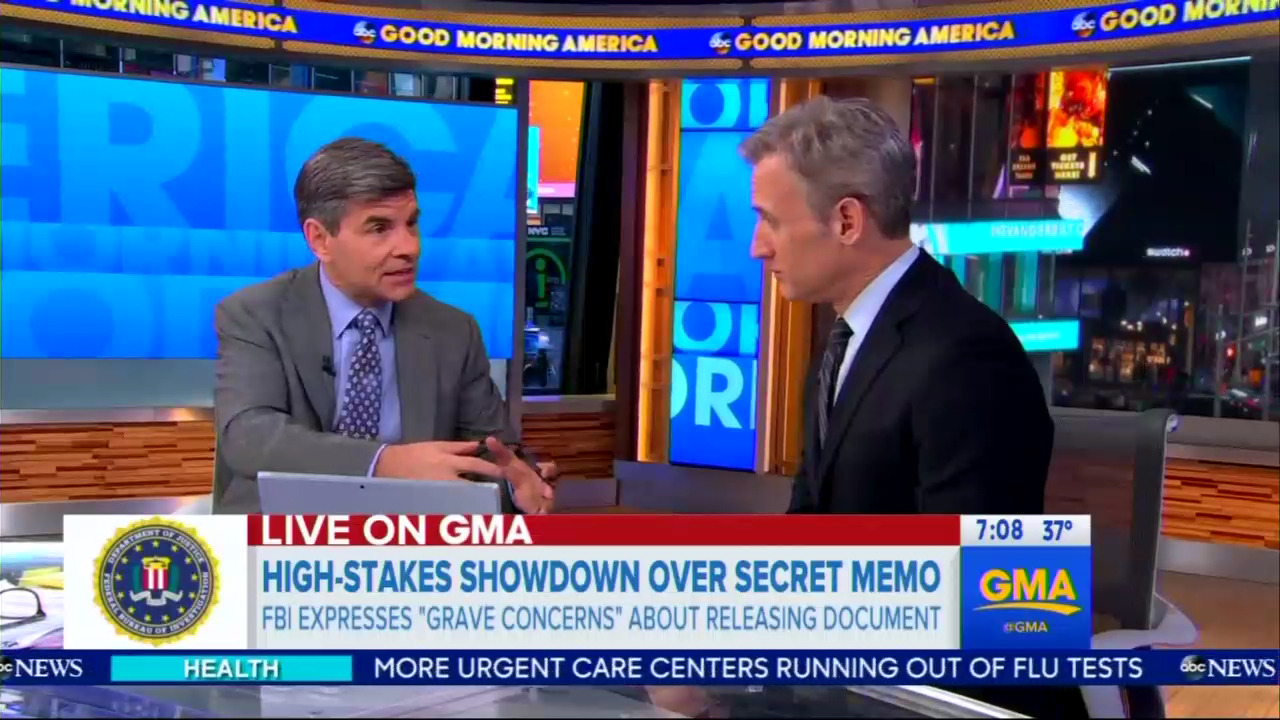 The 2016 election still isn’t over for the liberals in the media, who keep trying to find ways to prove that President Trump “obstructed justice” and should be impeached, just past a year into his presidency. Thursday on ABC’s Good Morning America, anchor and former President Clinton staffer George Stephanopoulos eagerly hoped they had finally found the evidence needed to oust Trump.

ABC’s Chief Justice Correspondent Pierre Thomas began by hyping a New York Times report based on anonymous sources, (what else?), reporting that a former legal advisor for Trump named Mark Corallo is expected to be interviewed by FBI special counsel Robert Mueller soon, and will tell Mueller that Hope Hicks and President Trump knew the real reason for the Don Jr. Trump Tower meeting, back in June of 2016, and tried to hide the revelation from the public, making up a story about Russian adoption.

Since President Trump denied knowing about the meeting publically, ABC hoped this would be the crucial “piece of evidence” for “obstruction of justice.”

“As always, the key question, what did the president know, and when did he know it?” Thomas ended his report on speculation. After that, George Stephanopoulos sat down with ABC’s legal analyst Dan Abrams to salivate over the news.

“It turns out to be a misleading statement. So the big question there is,would the president being involved in basically lying to the public be part of an obstruction of justice case?” Stephanopoulos eagerly asked Abrams.

Abrams suggested it could be used in a case for impeachment. “It could be. Certainly any lies can be part of an obstruction case, right?” he replied.

Abrams then referenced Bill Clinton, saying that Ken Starr based part of his argument for impeachment on Clinton lying to the public. But he denied that one lie would be enough to impeach Trump. “I don't think that would be the case here just a lie in and of itself,” he added.

But that was enough for Stephanopoulos to cling to.

“But one piece!” he gushed.

Abrams conceded, calling the allegation of lying “an important piece in the puzzle,” “if true.”

This isn’t the first time, nor will it be the last certainly, that ABC has eagerly hyped they found a way to impeach Trump. Back in May, Stephanopoulos brought fellow Democrat Adam Schiff on GMA to gossip over whether Trump could be impeached for “obstructing justice” by firing James Comey. He brought up impeachment not once but twice on that show alone. On another broadcast, where he again talked with legal analyst Dan Abrams, Stephanopoulos brought up impeachment again, citing an Obama mentor who was recommending it. Even after Abrams cautiously dismissed Stephanopoulos’s hype, the journalist hoped the non-existent taped conversations between Comey and Trump would be “a piece of evidence” to prove “obstruction of justice.”

Read the entire exchange below:

STEPHANOPOULOS: Let's talk to our chief legal analyst Dan Abrams about this right now. So you've got this meeting on Air Force One, the president is there. Hope hicks, one of his closest aides is there. Don Trump Jr. is on the phone. It turns out to be a misleading statement. So the big question there is,would the president being involved in basically lying to the public be part of an obstruction of justice case?

DAN ABRAMS: It could be. Certainly any lies can be part of an obstruction case, right. When you're putting together possible obstruction and different pieces and lies become part of those pieces, but, remember, in the case of Bill Clinton, when Ken Starr recommended the articles of impeachment, one of them was strictly based on lying to the public. Now, I don't think that would be the case here just a lie in and of itself.

STEPHANOPOULOS: but one piece!

ABRAMS: But it becomes an important piece in the puzzle if true.