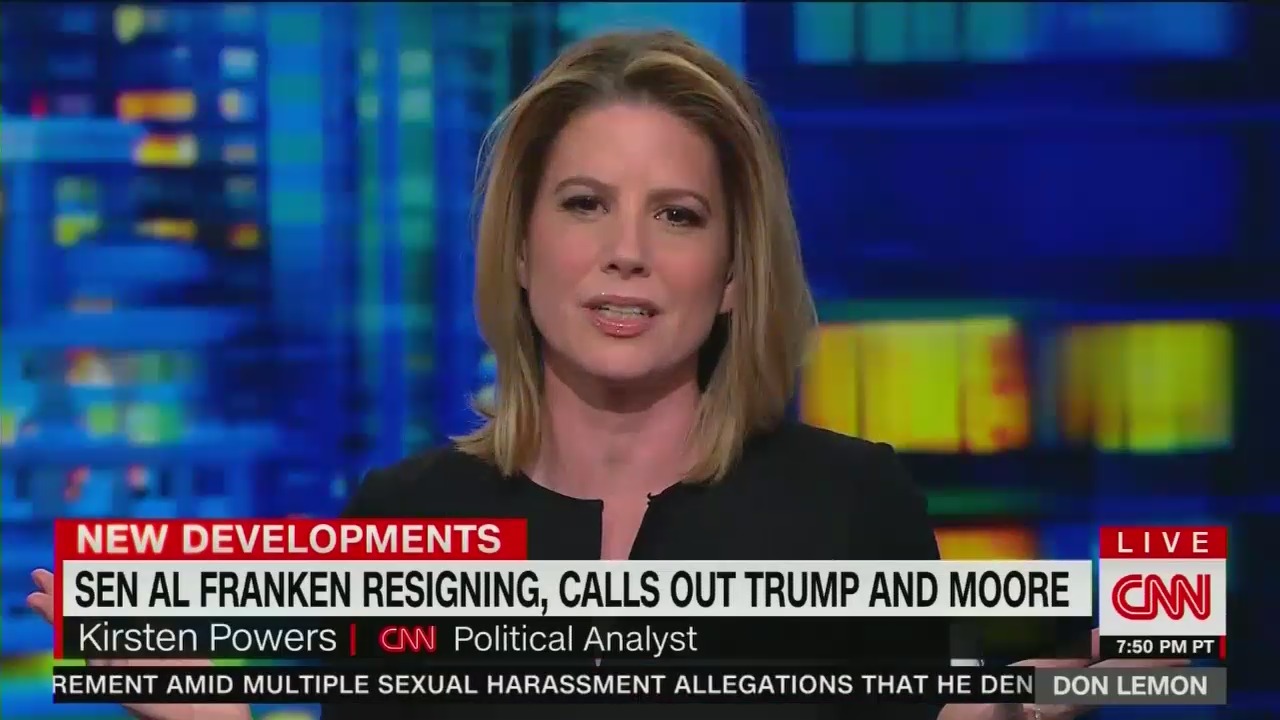 After Democrats pressured Minnesota Senator Al Franken to resign yesterday, all of a sudden, the media considers Democrats the party of “morality” and “family values.”

On Thursday's CNN Tonight With Don Lemon, liberal CNN political analyst Kirsten Powers battled conservative CNN political commentator Scott Jennings over this notion, with Powers staunchly insisting that Democrats had no ulterior political motive in ousting Franken, but only did so from the goodness of their hearts.

It began with Jennings commending the Democrats for pressuring Franken to resign. But, he argued, the move was clearly political, since they’ve supported and excused Bill Clinton’s actions for decades:

Let's be clear talk about the Democrats for a minute. They got this Franken thing right. Nancy Pelosi got it very wrong on Conyers on Meet the Press the other day They’ve gotten it very wrong for years trying to wrestle with Bill Clinton's legacy so let's not pretend that the Democrats got it right one day and all of a sudden they own the moral high ground here. They still have their own issues to reckon with.

This clearly irked Powers who tried to shush Jennings from bringing up Bill Clinton.

“I want to address that issue. Scott--” she began.

“They got it right on one senator but they've gotten it wrong on Bill Clinton forever,” Jennings argued again.

“You know what, Bill Clinton what is Bill Clinton even doing right now? Why are we even talking about Bill Clinton? It’s getting so old,” Powers said dismissively.

“I am so tired of--It just has nothing to do with anything,” Powers ranted.

“You’re tired of it because it makes my point,” Jennings pointed out.

Powers forcefully argued this was a moral decision for Democrats, not political:

It was a difficult decision for them. This was not easy. It is somebody who was beloved by Democrats, he's an icon, he’s a friend to these senators. They decided they believe the women and they came out and said he needed to resign. They could pay a price for it and they still did the right thing, and I think they should get credit for it. I don't think we should keep saying like, ‘Oh, this was just some political move.’ I think that Kirsten Gillibrand really believes these women.

Then the pair got in a back-and-forth argument about Franken’s resignation, with Jennings insisting this was obviously motivated by the Roy Moore situation:

“Look, I think they did get it right. I am not disagreeing with you on that, but it took the Republicans screwing up really badly by going back in for Roy Moore to cause them to do it,” he argued.

But Powers was adamant that Democrats had pure motives:

POWERS: That's not true. There's no evidence. There’s just no evidence of that. People keep saying that!

POWERS: But what's your evidence of that?

JENNINGS: I think they did the right thing and it’s good politics for them--

POWERS: People keep saying this over and over that this was the motivation. But I have spoken to people who were very involved in the process and this is not what they said happened. And Politico reported this as well, the women senators were very upset about this and they told Franken that he needed to resign and they gave him time to do it and they basically said if one more person comes out, we're going to say something. That's been reported...People have to stop saying different things unless they have some kind of inside information about what happened in the Democrat party.

After a commercial break, Lemon asked fellow guest and New York Times columnist Bari Weiss to respond to Powers’ point that this wasn’t a “purely political” move for Democrats.

She went on to disagree with Powers that Frankens resignation was necessarily a good thing in the grand scheme of things. Weiss argued that she was fearful that we would start punishing all actions the same way, regardless of the severity of the charge:

What I am worried about is that right now, the punishment, punishments are supposed to fit the crime. Right now, we're seeing the same punishment for sexual harassment, sexual assault, rape, and my fear is that in punishing all of these things the same way, we're actually devaluing the things that are much, much graver.

She bashed the idea that Democrats had an ulterior motive, and that this zero tolerance policy could have any negative ramifications. “Remember, the Democratic party is the party of women!” she gushed.

Citing Franken’s comparison to Roy Moore and Donald Trump, Powers complained that he shouldn’t do that because Republicans have a “really low standard:”

“Guess what, the Republicans have a really low standard and the Democrats are ahead of the Republicans on this and they need to be pulling them with them. Not going down to their level,” she sneered.