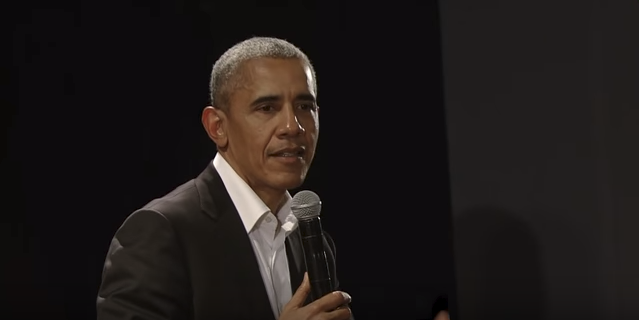 In a friendly interview with CBS News financial analyst Mellody Hobson, President Obama suggested we could have an American genocide akin to what happened in Nazi Germany with Donald Trump as President.

The former president was speaking to the Economic Club of Chicago when he made the caustic remark, in comments captured by Crain’s Chicago Business political columnist Greg Hinz.

According to Hinz, Obama warned Trump’s “nativism” and distrust of the press would cause our “democracy to fall apart quickly.” Obama then made the connection between Trump and Hitler, warning “60 million people died,” when the world got “complacent.”

Take that, @realDonaldTrump: @BarackObama makes clear his view that a complacent America could be headed the way of Nazi Germany. Read his remarkable comments at #EconomicClub of Chicago. @BarackObama2Day https://t.co/XD4gdhjDRr

Obama moved from that to talking about a nativist mistrust and unease that has swept around the world. He argued that such things as the speed of technical change and the uneven impact of globalization have come too quickly to be absorbed in many cultures, bringing strange new things and people to areas in which "people didn't (used to) challenge your assumptions." As a result, "nothing feels solid," he said. "Sadly, there's something in us that looks for simple answers when we're agitated."

Still, the U.S. has survived tough times before and will again, he noted, particularly mentioning the days of communist fighter Joseph McCarthy and former President Richard Nixon. But one reason the country survived is because it had a free press to ask questions, Obama added. Though he has problems with the media just like Trump has had, "what I understood was the principle that the free press was vital."

The danger is "grow(ing) complacent," Obama said. "We have to tend to this garden of democracy or else things could fall apart quickly." That's what happened in Germany in the 1930s which, despite the democracy of the Weimar Republic and centuries of high-level cultural and scientific achievements, Adolph Hitler rose to dominate, Obama noted. "Sixty million people died. . . .So, you've got to pay attention. And vote."

As of this write-up, his anti-Trump comments have been ignored by the media.

No surprise either that Obama didn’t appear to get pushback for this comment from his personal friend and financial backer, who just happened to be his interviewer, Mellody Hobson. Hobson is not just a financial contributor for CBS, but is a close friend and high profile donor to Obama’s two presidential campaigns. At a White House event in 2013, Obama warmly described Hobson as a “great great friend”:

Mellody was being very modest when she said she had a front-row seat. Mellody was one of my earliest supporters back when nobody could pronounce my name. And her and John Rogers at Arial Capital helped to co-chair some of my first fundraisers. And they’d have to drag some straggly group in, kicking and screaming, and write a check and listen to this young senator who had a lot of ideas but not necessarily any realistic prospects to win. And she went through a lot of ups and downs with me and my career and is just a great, great friend. So I want to thank her publicly for all the support that she’s given us.

Hobson is also married to billionaire George Lucas and has donated over $100,000 to Obama’s presidential campaigns. She is frequently quoted by the media, like in this recent writeup by The New York Times where she called Colin Kaepernick "a hero of mine."

Faced with such friendly interviewers and audiences, both Obamas haven’t been sitting back quietly while President Trump took office.

At two separate climate conferences this past week, Obama blasted the current administration for opting out of the Paris Climate Agreement. To a group of business leaders in Paris, Obama lamented, “We have a temporary absence of American leadership” on climate change.

In September, Obama criticized Trump’s decision to rescind DACA as “cruel” and “self-defeating.”

The former FLOTUS has also gone after Trump, making snarky comments about his use of Twitter, to several different audiences. In September, she slammed women who didn’t vote for Clinton as betraying their sex, characterizing them as weak-minded and sexist.