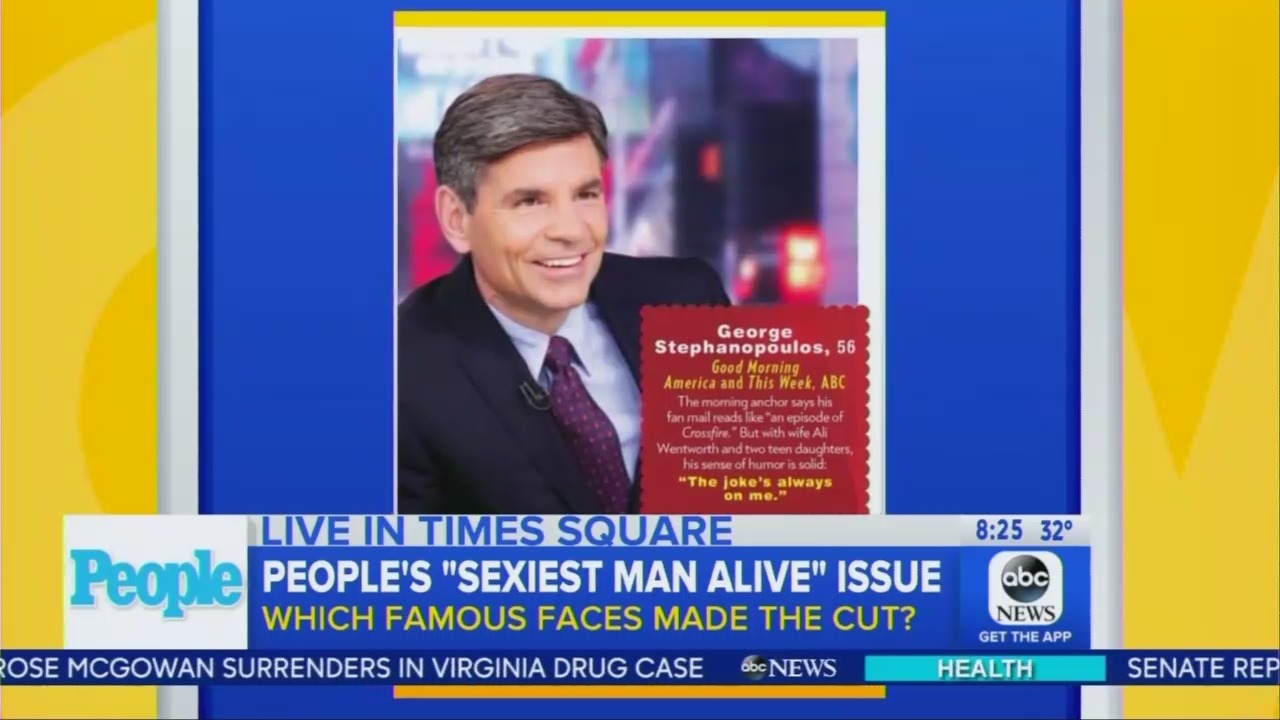 We all know the press loves to congratulate itself on “holding Trump accountable,” with such pompous slogans as “Facts First” as “Democracy Dies in Darkness.” However sometimes that braggadocious attitude stoops so low it’s beyond parody. Take for example Wednesday’s Good Morning America, where the anchors eagerly gushed that two of their hosts made People Magazine’s “Sexiest Man Alive” annual list.

After sharing the celebrities who made the superficial and clearly tone-deaf list, anchor Michael Strahan asked People’s executive editor Kate Coyne who else made the list.

“You have a new category. A new category this year called ‘Hot off the press.’ A few guys that I know are on this list,” he noted.

“Yeah. I feel like there might even be somebody in this studio,” she gushed, as ABC brought up an image from the magazine showing anchor George Stephanopoulos.

The audience and fellow ABC hosts loudly cheered as Stephanopoulos looked on sheepishly. “Like you said, flavor for everyone,” he joked.

“There he is, there he is, in all his sexy glory,” Coyne stated. “I feel like I should be fanning myself right now,” she joked, as Strahan began to fan himself.

“We had a lot of fun with that act. You know, this is I think a year in which the media has sort of unfairly come under fire in a lot of ways and so it's great to be able to celebrate our sexy brothers of the press,” Coyne gushed.

If there was any doubt that Coyne was referring to President Trump with that comment, one has to take only a passing glance at her Twitter account. Just about every tweet is anti-conservative and anti-Trump, even retweeting accounts calling Trump a “callous asshole,” so it’s not too much of a stretch to make that assumption.

The ABC panel continued to ooh and aah over the magazine spread. Anchor Robin Roberts called out, “David Muir!” noting the ABC World News Tonight anchor also made the cut.

“David Muir is on there too,” Coyne agreed as the ABC hosts and audience applauded.

Turning to Strahan, Coyne said, “We had you naked in there like just a few years ago, so we got you covered,” she reassured the only male host on set not in the magazine spread.

“No, no no! I'm good. I'm just laughing because you said ‘our sexy brothers of the press.’ I love that,” Strahan joked.

In light of all the recent sexual assault scandals coming to light, even with members of the press like MSNBC’s Mark Halperin, is giving an award to the “sexiest” member of the press really what ABC wants to tout? To make their segment even more tone-deaf, GMA had this “pop news segment” shortly after a full-fledged report on sexual assault lawsuits against the transportation company Uber.

This embarrassing segment was brought to you by McDonald’s, Honda, and GMC.