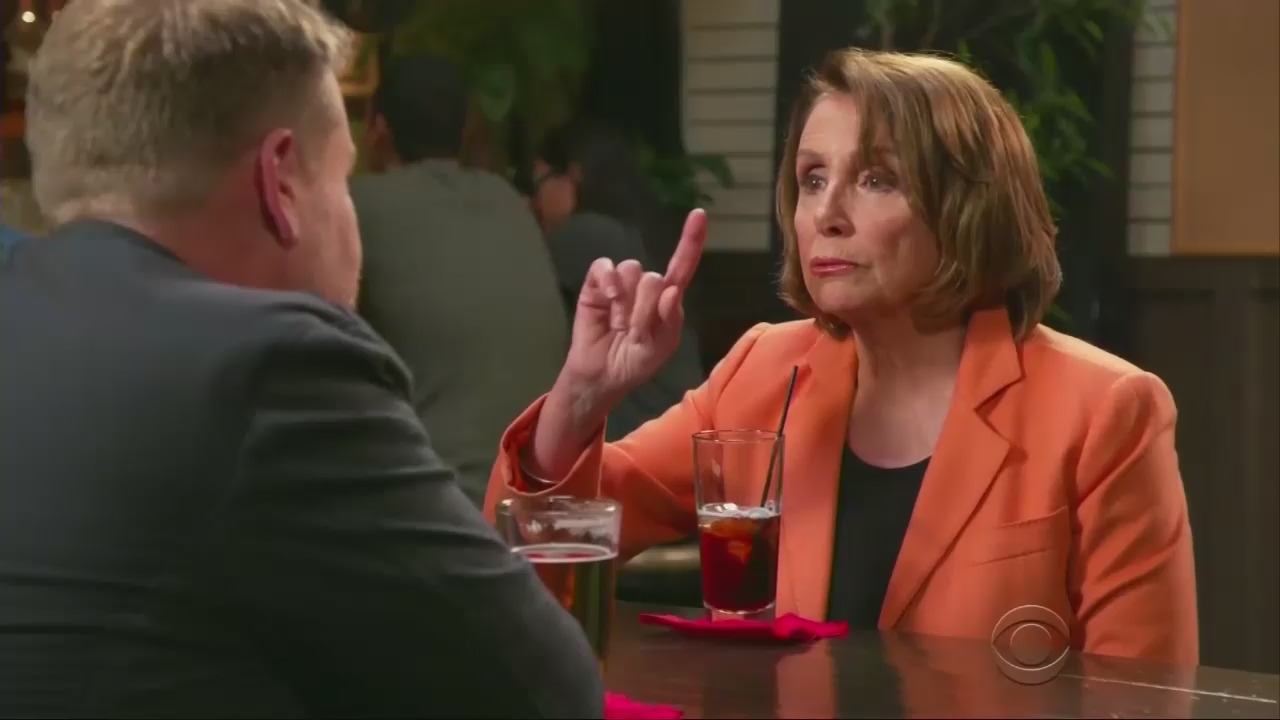 Democratic congresswoman Nancy Pelosi (CA) appeared on CBS’s The Late Late Show early Wednesday morning, where host James Corden took Pelosi to a British pub for his “Pub Politics” segment to drink beer and discuss politics. Corden encouraged the Democratic leader to share insider details about the Mueller-Russia investigation and what it was like working with Republicans.

At one point, Corden tried to get Pelosi to “say something nice” about various Republicans, but was seemingly only using the opportunity to mock the GOP himself.

Corden, who is British, joked around with Pelosi about British food before diving straight into politics. He egged Pelosi on about the Russia investigation, urging her to spill the juicy details she must have about Trump being investigated by the FBI Special Counsel Robert Mueller:

CORDEN: Talk to me about this Russia investigation.

CORDEN: That's what you think we should all be calling it.

PELOSI: That's what it is.

CORDEN: Let me ask you, is there stuff that you know about it that you can't tell me that if you did tell me would blow my mind?

PELOSI: Well, I can't confirm or deny even that.

Pelosi laughed and smiled, then appeared to blink as she started to say, “I cannot confirm or deny” again. Corden grinned widely and pointed at Pelosi as if he caught her blinking to confirm she knew something that the media hadn’t already reported.

Corden went on to question Pelosi, framing every question as a sky-is-falling scenario:

CORDEN: Do you think the political divide in America is the greatest you've seen it the 30 years you have been in politics?

CORDEN: How do you feel about the state of politics at the moment? Do you worry we're going to end up with a situation where America only elects celebrities? Do you worry about that, as someone who devoted their life to politics?

After playing darts, Corden ended the friendly interview by asking Pelosi to play a “game” with him, where he held up a picture of a member of the Republican party, and she had to say one nice thing about each person.

CORDEN: Up first, this guy. Say one nice thing about Paul Ryan

That was how most of the remaining interview went, with Pelosi struggling to come up with anything nice to say and Corden cracking up with laughter, because, as we all know, Republicans are so terrible that it's hard to come up with even one redeemable trait.

Pelosi had the worst time, of course, with President Trump.

CORDEN: Okay. Time for the big dog. [holds up picture of Trump] Is there one nice thing you can say about Donald Trump?

PELOSI: I hope so. I hope I can. [keeps looking intently at photo]

CORDEN: But not today?

CORDEN: Is there really nothing? You couldn't think of one nice thing to say about him?

PELOSI: He's nice to me.

CORDEN: Is he respectful?

Corden ended the game by saying he had “one final member of the Republican party” for Pelosi. He then held up a photo of the villain Darth Vader from Star Wars.

Pelosi chuckled and immediately quipped, “Even the party has gone beyond Darth Vader.”

As if to one up her, Corden replied back: “Darth Vader? I thought it was Dick Cheney!” as she laughed and he wrapped up the interview, thanking her for coming on the show.

Corden appears to be trying to better his ratings by joining the other late-night hosts on the Trump-bashing bandwagon. In the last few months he’s attacked Republicans, sang anti-Trump songs, and commiserated with his Democrat guests over the Trump presidency.